Woman, 31, and girl, 7, sent to hospital after car rams into tree at Sembawang 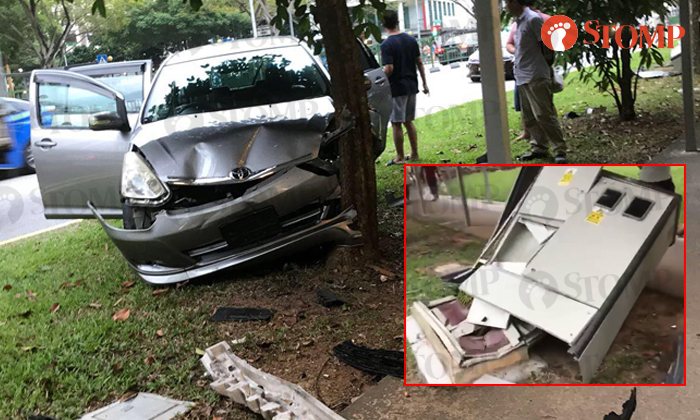 A car crashed into a tree along Sembawang Way at around 6.45pm yesterday (April 8), mangling a traffic light control box in the process.

A 31-year-old woman and a seven-year-old girl were conscious when sent to Khoo Teck Puat Hospital and KK Women's and Children's Hospital respectively.

The driver is believed to have self-skidded the car, resulting in the accident.

Stomper Gabriel, who was at the scene, contributed photos and videos showing the silver Toyota on the grass patch next to a pavement.

The vehicle had its front bumper wrecked and debris can be seen strewn around it.

In response to a Stomp query, the police said they were alerted to the car accident at the junction of Sembawang Way and Sembawang Drive at 6.46pm.

The Singapore Civil Defence Force (SCDF) told Stomp that it responded to the road traffic accident at around 6.50pm and dispatched two ambulances to the scene.