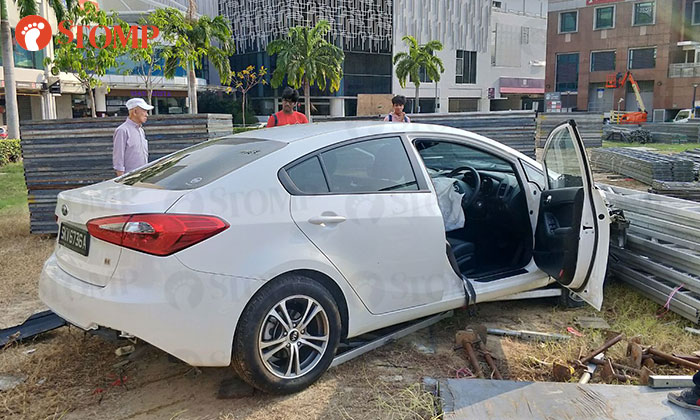 A driver of a white car grazed a pedestrian and ploughed through barriers before charging into an open field at Tampines Central 5 late Wednesday evening (April 4) at around 5.18pm.

Stomper Wayne witnessed the incident and took photos which he sent to Stomp.

According to Wayne, the white car had stopped at a traffic junction, but suddenly accelerated, grazing a pedestrian who was crossing the road.

It then ploughed through some barriers and bushes, ending up on an open field between Tampines Mall and Tampines MRT Station.

After the incident, the driver and a passenger alighted the vehicle, while the pedestrian sat on the road, crowded by passers-by.

Said Wayne: "The car left a trail as it ploughed through.

"I’m not sure what happened to the pedestrian as there were too many people crowding around."

"On April 4, 2018, at 5.18pm, the police were alerted to an accident involving a car and a pedestrian along Tampines Central 5.

"The 62-year-old female pedestrian was conscious when conveyed to Changi General Hospital.

Stomp understands that the driver had lost control of the car prior to the accident.