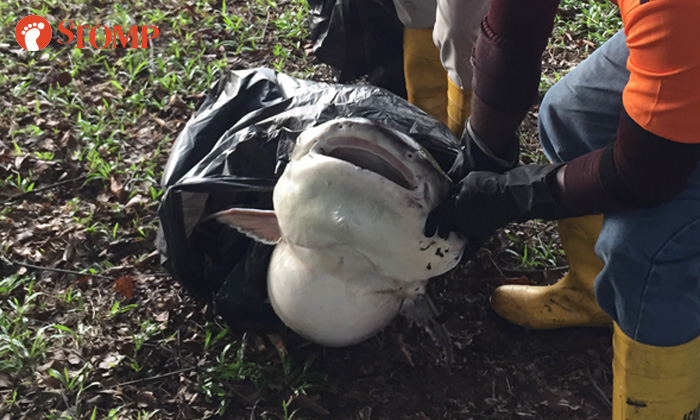 Stomper Rachel was having her morning jog at Bedok Reservoir at around 8.20am on Saturday (Jul 14) when she saw a huge fish being put into a bag.

Rachel said there were a total of three guys around the fish, of which two of them were cleaners.

Rachel had identified one of them as an officer from Singapore Power (SP) as it was written on the back of his shirt.

She said: "I was jogging when I saw them placing something big in a plastic bag, so I approached them to ask since I was curious.

"The fish seemed to be about a metre long and had to weigh at least 16kg because I was told by the SP officer that at least two men were needed to carry it.

"The officer told me that the cleaners had discovered the fish that was floating in the water when they were patrolling the reservoir."

Being initially sceptical about there being fish in the Bedok Reservoir, Rachel was surprised when she saw how huge the fish was.

"It was my first time seeing such a big fish in this reservoir," she said.

"It was seldom that I saw anyone catching anything, or even if they did, it was never as big."

Related Stories
Watch how gulper catfish swallows another fish of the same size
What is this insect with freakishly long legs at Bukit Timah Nature Reserve?
Monitor lizards fall into drain while wrestling at Dairy Farm Nature Park, but carry on fighting
More About:
fish
animals
unusual