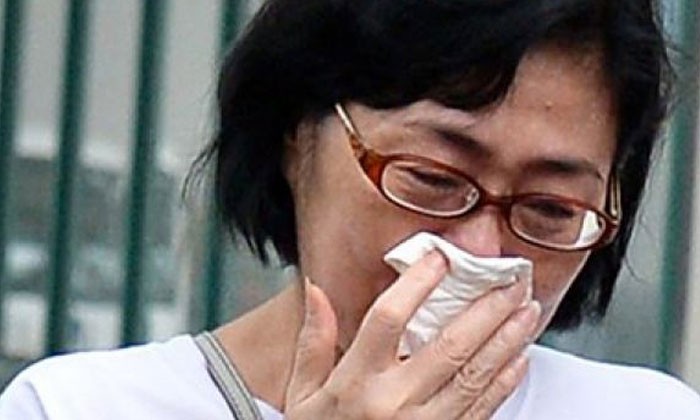 Madam Serene Tong was at work on Tuesday afternoon when she was told in a phone call that her husband was in hospital after an accident at Underwater World Singapore (UWS).

The clerical officer was not told the details of the accident, and assumed it was not serious.

In his 25 years of working at UWS, Mr Philip Chan had ended up in hospital only once, after a shark attack.

But this time, Mr Chan, the head of UWS' diving unit, had a fatal encounter with a stingray.

The 62-year-old, who was also the senior supervisor of UWS' curatorial department, was taken unconscious to the Singapore General Hospital (SGH), where he died.

Madam Tong, 59, told The New Paper yesterday evening: "Many years ago, a sand tiger shark mistook him as food and bit his head. He had to be stitched up and was hospitalised for a few days.

"He managed to recover. So on Tuesday, I didn't think the accident was serious, and didn't rush to SGH."

When she got there, her two daughters, aged 26 and 32, hugged her and told her the terrible news.

Madam Tong, who has a 15-month-old granddaughter, broke down several times when she recalled the painful incident at her husband's wake at the void deck of Block 52, Lengkok Bahru, near Jalan Bukit Merah.

"I wasn't told during the phone call that he had been stung by a stingray. We were married for 34 years. I can't believe he's gone. He loved his animals very much."

About 100 friends and family members were paying their last respects to Mr Chan when TNP was there.

His diving suit was displayed beside his casket and photographs of him in his younger days were displayed.

Madam Tong said: "He was a very straightforward, honest and hard-working man. He was a loving father and husband. He loved diving. It was his passion."

She cracked a slight smile when she recalled how Mr Chan had encouraged her to take up diving.

She said: "My daughters also know how to dive. I went diving with him in Malaysia less than five times. I was not a very good diver, but he loved the water."

Earlier yesterday, Mr Chan's older brother, Mr Simon Chan, 64, told reporters outside the mortuary that he received the bad news at around 4pm on Tuesday from his niece.

He said in a mix of Mandarin and English: "She was crying when she told me, 'Uncle Simon, my father is dead'.

"I was the one who identified his body because I didn't want his wife and daughter to see him in such a state. He had two bandages on his chest, a bigger one on his right and a smaller one on his left."

Mr Chan was impaled by the barb of a stingray as he was transferring one of the last batches of his beloved sea creatures at around 2.20pm. It was one of his last tasks at the now-defunct UWS.

Mr Chan, who joined UWS when it opened in 1991, had stayed back to care for the remaining marine animals after UWS closed in June.

The sting from the leopard whipray - a rare stingray - left him unconscious, and Singapore Civil Defence Force paramedics performed cardiopulmonary resuscitation (CPR) on him on the way to SGH.

His brother added: "We are still in shock that he died in such a horrible way. It was nearly the last stage of his job and I knew that he had been tired over the past weeks from moving the sea animals."

TNP understands that Mr Chan was working with a group of colleagues and was transferring the last stingray in a large tank when the accident happened.

The Ministry of Manpower has instructed UWS to stop all activities associated with the transferring of sea animals after the incident.

Mr Simon Chan, a construction project manager, said: "My brother was a very experienced diver. He knew that these animals were dangerous."

Like Madam Tong, Mr Jack Png, 47, who knew Mr Chan from their days of working together at Sentosa's Coralarium in 1992, also thought that his friend had been involved in a minor mishap.

"Unforeseeable situations like this have happened before many times - it could be the sting of a puffer fish or getting hit by the tail of a shark.

"Although he experienced some dangerous or difficult situations when it comes to the animals, he never complained. He always tried to solve the problem," added Mr Png, who runs his own commercial diving company.

It seems like Mr Chan will remain deeply entwined with the underwater world, even in death.

Mr Simon Chan said in between tears: "He had told his wife that he wanted his ashes to be scattered at sea. His whole life revolved around the ocean, he will never leave it."

Many years ago, a sand tiger shark mistook him as food and bit his head. He had to be stitched up and was hospitalised for a few days.

A big brother to others

Mr. Jimmy Tan said, "I still can't believe he's gone. I first knew Philip in 1984 when I was a part-time lifeguard on Sentosa. We remained close and were like brothers. He was my mentor."

Water, to Mr Philip Chan, was like his second home.

Ironically, that was where the 62-year-old met his demise after he was stung by a leopard whipray, his good friend, Mr Eric Ko, 62, told The New Paper yesterday.

"I really cannot accept it. He was good at his job... He had been feeding these animals... How could this have happened?" said Mr Ko.

They met more than 20 years ago when Mr Chan was working at Underwater World Singapore (UWS) and Mr Ko was with Americ International Marine and Sports Centre, which services diving equipment.

"We were in the same category - same diving interest, same age... We could chat about everything," he said.

On land, the pair were "kopi kakis".

"He would come over to chat whenever he was free after work.

"He liked to talk and joke. He was humble, not calculating, and had no temper."

In the waters, they were diving buddies, looking out for each other's safety.

They went on leisure diving trips with their group of friends every year until Mr Chan stopped recently because of an ear problem.

On dives, Mr Chan would make sure the less experienced divers did not have any problems.

"When some divers couldn't descend into the water successfully, he would take them down slowly. If they ran out of air, he would share his air regulator with them," said Mr Ko.

Another close friend, Mr Jimmy Tan, 54, said: "I still can't believe he's gone. I first knew Philip in 1984 when I was a part-time lifeguard on Sentosa. At one point, both of us worked at UWS but I resigned in 1994.

"We remained close and were like brothers. He was my mentor."

Mr Tan, a section head at Bintan's Treasure Bay Resort, said they spoke last week and had planned to go diving at Pemanggil Island, off Mersing in Johor, next March.

"It was his favourite diving spot. I will miss him dearly," he added.

Miss Sam Shu Qin, 27, who worked with Mr Chan at UWS, said Mr Chan was like family to his younger colleagues.

She told TNP: "He was like a big brother who cared so much about us, a great mentor and friend who taught us so much more (beyond) diving and working with marine animals.

"There's hardly anyone who's more passionate about taking care of the marine animals."

Mr Jack Png, an ex-colleague who had known Mr Chan for more than 20 years, saw him as his mentor not just at work, but also in family life.

"We had seen each other from singlehood to marriage. He's someone who held us all together," said Mr Png, 47.

Mr Ko also attested to Mr Chan's devotion to work. Their recent conversations had revolved around it.

Said Mr Ko: "He was a workaholic. He felt sad that Underwater World was going to close. He told me he would just buy a car, go for a holiday with his wife, then come back and look for a job. Once he retires, his brain will die, he told me."

Mr Png, who runs Joint Pacific Ocean Underwater Services Singapore,said he had asked Mr Chan to join his company after his break.

"He was so active and full of life. It should not have ended like this," he added.

The leopard whipray, sometimes called the leopard stingray, can be recognised by its pattern of leopard-like spots.

The tail is long and slender (up to three times the body length), tapers to a fine point and has a single barb.

It feeds on crabs, shrimp and shelled invertebrates.

The leopard whipray can be found in the Indo-West Pacific region from the Bay of Bengal to New Guinea, north of Japan's Ryukyu Islands and south of northern Australia.

Related Stories
Man suffers abrasions on back, shoulders and elbows after getting startled by dogs in Punggol
Cow savagely attacks men in India who were violently stabbing girl in 'honour killing'
Badass Japanese fisherman fights off 1.9m attacking bear with his bare hands
More About:
animal attack
dead
animals
Singaporean diver that died