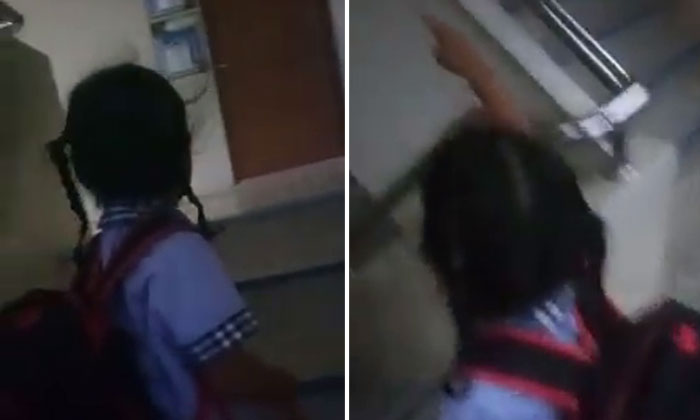 A video of a young Thai girl talking to her "imaginary friend" has gone viral on Facebook.

The clip was taken at a school in Songkhla, Thailand on Monday (Sep 17).

In the video, the girl's mother is asking her whom she is talking to.

She replies that she is talking to another child standing on the stairway who is wearing pink shoes.

According to The Nation, Kru Ju Taksaporn Yodthong said that she had noticed her daughter, Im-aim, speaking while standing alone in front of a computer room on the second floor of the school.

When Im-aim said that she was talking to another child, Kru looked around and found there was nobody else there as all the other children had left.

The mother-daughter duo had been stranded by the rain and did not start to leave the school until dusk.

In the video, Kru tells Im-aim to tell her "friend" that their car was full so that he or she should carry on playing and not follow them.

When the girl turns her back to convey this message, a mysterious third person's voice is heard saying "Krub" which translates to "yes, sir".

The video has since garnered over 5.6 million views and over 60,000 shares since it was posted on Monday at about 7.36pm.

In response to comments from netizens, Kru said she did not know who replied "Krub" and that she did not want to see the owner of the voice as she was startled enough.

Related Stories
Video of woman in white crawling up pillar will give you chills
For real? Chinese exorcists claim house is haunted by 30 'Jiangshis' and more than 100 female ghosts
Resident complains of weird noises from Marine Parade flat -- that's been empty ever since owner died
More About:
creepy
scary
ghost
supernatural
Thailand