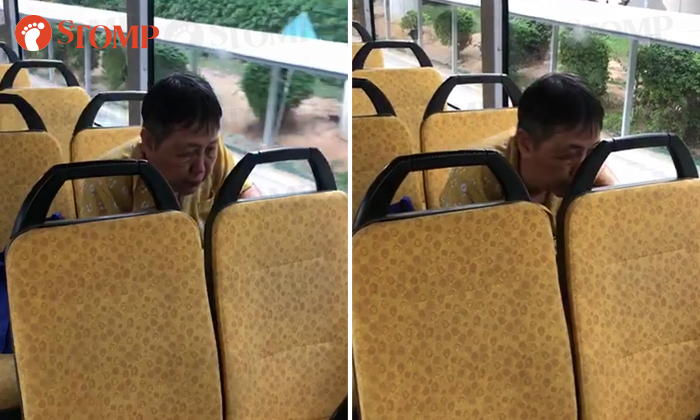 A woman was caught on camera spitting on the seats of a double-decker bus multiple times.

A Stomper said her sister, known as Flo, had witnessed the incident on SBS Transit bus service 51 last Thursday (Apr 2), at around 2.25pm.

According to Flo, the woman had moved between seats on the upper deck of the bus and "purposely" spat on them.

In a video taken by Flo, the auntie is seen spitting on the seat in front of her at least twice.

She remained silent when Flo told her, "Auntie, you can't spit like that. You can't do that."

Flo also posted about the incident on Facebook and said the bus captain had told the auntie that he would call the police if she continued spitting. 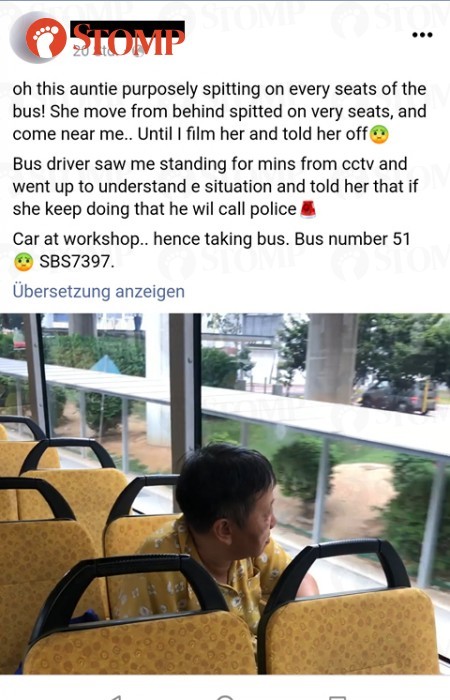 The Stomper added: "The bus captain was aware of the incident and informed someone via his walkie-talkie.

"I hope to notify the public via Stomp so that the auntie will not do the same thing again."

Last month, three teenagers were arrested for spitting over the railing in a Bugis shopping mall. A shopper had lodged a police report after spittle landed on him.

In a separate incident, another three teenagers were nabbed for a similar stunt in an unnamed shopping mall in central Singapore.

These came after two separate reports made on Feb 23 and 25, about spittle found on the mirrors and buttons inside the lifts of HDB blocks in Punggol Walk and Ang Mo Kio Street 32.

In yet another case, police investigated three 15-year-olds after SBS Transit lodged a police report on Feb 20 regarding spittle found on the buttons of a lift at Rumbia LRT station.