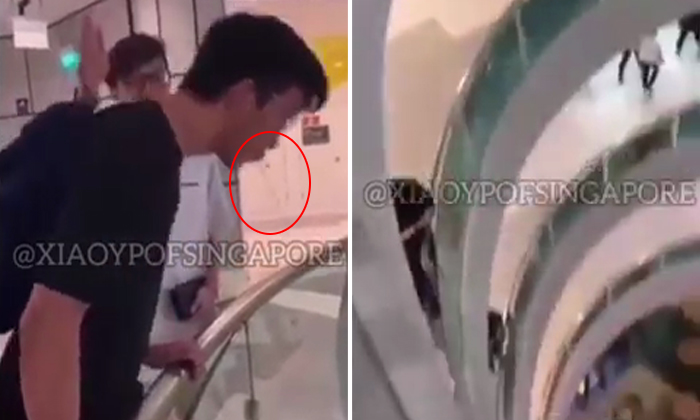 Three teenagers have been arrested for public nuisance after a video showing one of them spitting over the railing of a shopping mall in Singapore went viral online.

The two males and one female are aged between 17 and 19, said police in a statement on Thursday (Mar 12).

The police said they received a report "of an online video showing a male teenager spitting from a high floor of a shopping mall located in the central region of Singapore" on Mar 3.

Preliminary investigations revealed that an 18-year-old male teenager had spit over the railing from level 4 of the shopping mall on Feb 28, at about 6.30pm.

The act was recorded on video and subsequently posted on his friends' social media accounts.

"The videos had caused alarm and annoyance at a time when Singapore is dealing with the COVID-19 situation, as infections can spread indirectly through contaminated surfaces," said the police.

Through ground enquiries and with the aid of images from CCTVs, officers from Central Police Division established the identities of the three teenagers and arrested them.

If convicted for public nuisance, they face a fine of up to $2,000. If the act is deemed to be able to cause with reasonable probability, any common injury, danger or annoyance to the public, or to the people in general who dwell or occupy property in the vicinity, the offence will carry a jail term of up to three months and/or a fine of up to $2,000.

"The police take a serious view of such inconsiderate and irresponsible behaviour, especially in the current COVID-19 situation," they added in the statement.

"Everyone needs to play their part by observing good personal hygiene and being socially responsible."

In a separate case last month, three teenagers were investigated by the police for spitting on the lift buttons in a lift at Rumbia LRT station.

This comes after another incident involving two youths who recorded themselves 'sampling' drinks at a FairPrice supermarket and captioning the video "how to spread Wuhan".