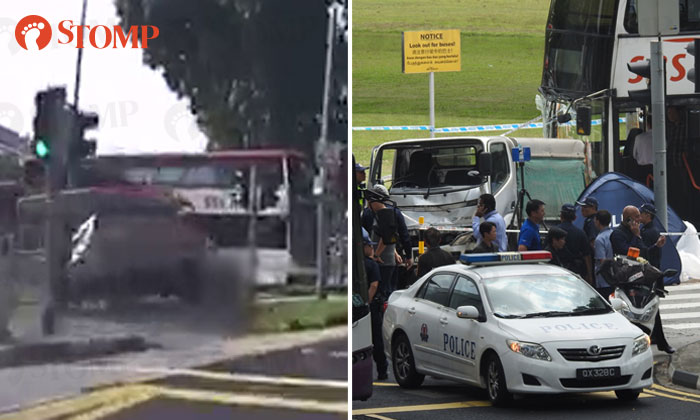 Stomper Lee was driving along Ang Mo Kio Avenue 6 when she saw a lorry suddenly mount a pavement and crash into three pedestrians near Yio Chu Kang MRT Station today (Apr 23) at around 9.36am.

Stomp reported earlier that the three pedestrians were pronounced dead at the scene by Singapore Civil Defence Force (SCDF) paramedics.

The driver of the lorry, a 25-year-old man, was taken to Khoo Teck Puat Hospital and subsequently arrested for causing death by negligent act.

Miss Lee shared the moment the lorry hit the victims in a video that she had captured on her car's dashboard camera.

"I was aware of this driver who had come from behind me and was driving next to me in the second lane," she said.

"Suddenly he cut in front of me to get into the first lane and initially, I thought he was going to drop somebody off at the bus stop.

"But to my shock, he didn't stop and mounted the pavement.

"He then continued to drive along the pavement and hit some people at the traffic light.

"I saw something fly but I wasn't sure, I needed to concentrate on the road."

From the video, it appears that the object the Stomper had seen flying was a wheelchair.

Miss Lee told Stomp that her legs were shaking as she continued to drive.

"I was in shock," she said to Stomp in tears.

"I didn't even dare to overtake any cars. I just drove slowly until I reached my office in Ubi."

She told Stomp that she decided to share the video because she believes that the families of the victims need to know what happened and hopes that it can aid in investigations.

"I can't imagine how the family members are feeling," she said.

"I would like to express my condolences to them."

Related Stories
3 pedestrians killed after getting hit by lorry near Yio Chu Kang MRT Station, driver arrested
NUS student who died in Clementi crash was only child: "She is my source of joy"
1 driver taken to hospital in accident involving taxi and 2 cars at Airport Boulevard
More About:
accident
lorry
fatal
pedestrians
death
deaths