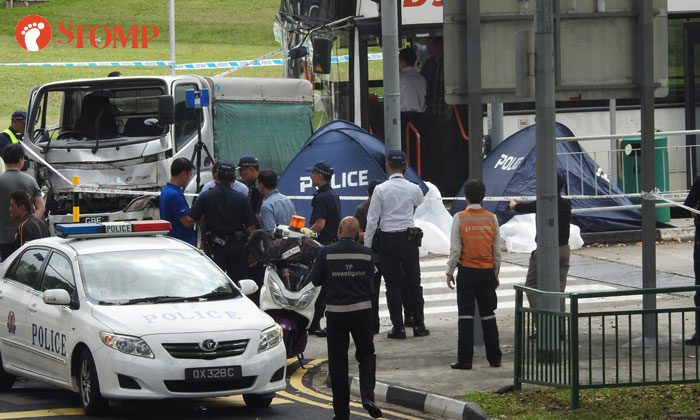 Three pedestrians were killed after a lorry crashed into them near Yio Chu Kang MRT Station on Monday (Apr 23).

The 25-year-old lorry driver has been arrested for causing death by negligent act.

The Singapore Civil Defence Force (SCDF) said that it responded to an accident involving a lorry, bus and three pedestrians near Yio Chu Kang MRT Station at 9.38am.

SCDF extricated two pedestrians from underneath the lorry using a rescue lifting airbag.

All three pedestrians were declared dead at the scene.

The driver of the lorry was taken to Khoo Teck Puat Hospital in a serious condition, an SCDF spokesman said.

The police said that they were alerted to a traffic accident along Ang Mo Kio Ave 6 towards Marymount Road involving a lorry, an SBS Transit bus and three pedestrians at 9.36am.

"The 25-year-old male lorry driver was conveyed to Khoo Teck Puat Hospital in a conscious state," said a spokesman.

"The police have arrested the lorry driver for dangerous driving causing death."

SBS Transit senior vice-president of corporate communications Tammy Tan told The Straits Times the SBS bus was waiting at the traffic light when the lorry hit the three pedestrians before crashing into the bus.

None of the bus passengers were hurt, Ms Tan added. "Our hearts go out to the family of the pedestrians."

When Stomp arrived at the scene, one of the bodies was being carried into a police van.

Stompers Mike and Alvin also shared photos taken at the scene of the accident with Stomp.

In one of the photos, a traffic light pole is on the road along with a mangled railing. 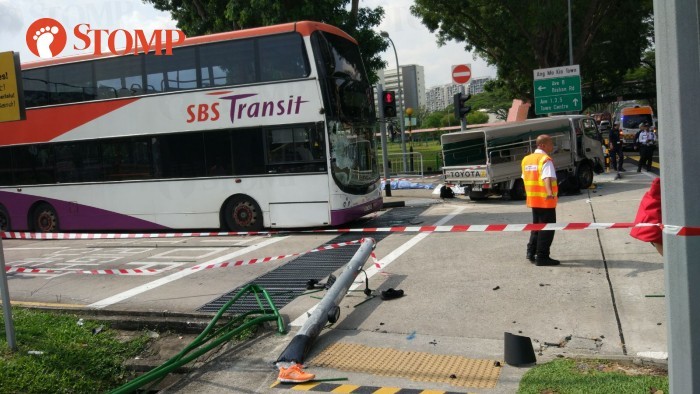 A black shoe and orange shoe are seen near the pole.

The front of the lorry appears to be damaged and the front windscreen of a double-decker SBS Transit bus behind it is shattered.

The Land Transport Authority (LTA) tweeted an alert to motorists to avoid the left lane on the road leading to Ang Mo Kio Avenue 8.

Related Stories
NUS student who died in Clementi crash was only child: "She is my source of joy"
1 driver taken to hospital in accident involving taxi and 2 cars at Airport Boulevard
36-year-old man sent to hospital after skidding motorcycle along AYE
More About:
accident
deaths
death
pedestrians
Bus
lorry