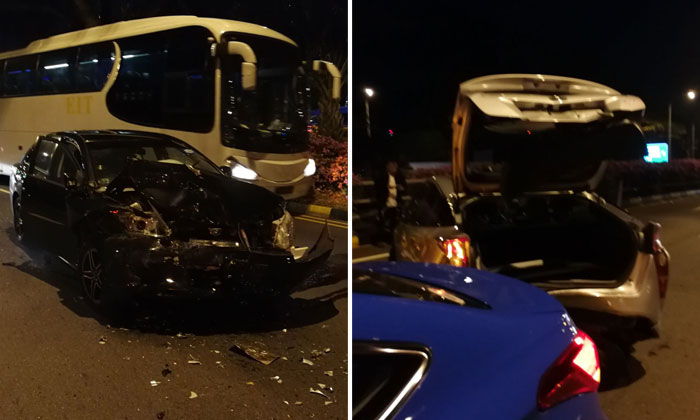 A 33-year-old man was taken to hospital in an accident involving a taxi and two cars along Airport Boulevard towards Changi Airport's Terminal 1 on Friday night (Apr 20).

Stompers Ah Boy and NoorWhirlzWindz alerted Stomp to the incident and shared photos that have been circulating on WhatsApp.

In the photos, the two cars involved appeared to be the most damaged.

Ah Boy told Stomp that he heard the accident caused a jam that lasted a couple of hours.

In response to a Stomp media query, a police spokesman said that they were alerted to the accident at 10.37pm.

"One of the drivers, a 33-year-old man was conscious when conveyed to Raffles Medical at Terminal 3," he said.

According to a Singapore Civil Defence Force (SCDF) spokesman, the man was then taken to Changi General Hospital (CGH) by an SCDF ambulance.

Stomp understands that another man was injured but refused to be taken to hospital.