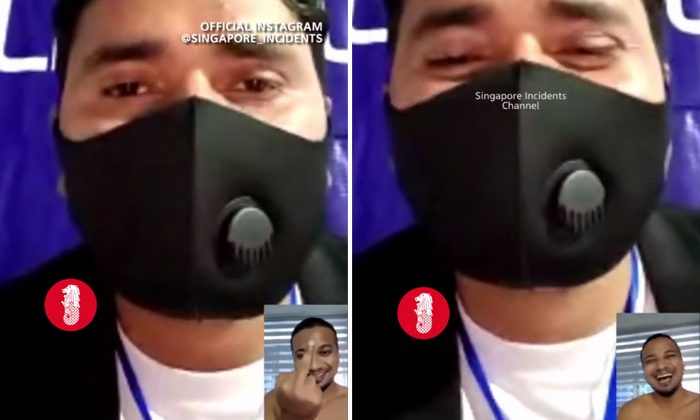 Laughter and courtesy are not what you would usually associate with scam calls.

However, that's exactly what one man experienced after he called out a scammer who claimed to be from "Singapore's Criminal Investigation Department from the police force".

A clip posted online shows the man listening to the scammer with an amused expression during their WhatsApp video call.

The scammer can be heard telling the man that his bank card had been declined "because you never update your IC in the bank, sir,".

He also repeatedly requested to see the man's IC.

The man finally acquiesced and said, "Let me just grab my wallet". He also asked for the scammer's name, to which the latter responded, "This is John Michael, sir".

The man then said, "John Michael. Ok, here's my IC," only to flash his middle finger instead and burst into laughter.

The man also called out the scammer and both ended up laughing.

The conversation even ends on a polite note, with the scammer saying, "Okay thank you, sir. Have a nice day," and the man responding, "Bye bye."

Such police impersonation scams are not uncommon here.

The Singapore Police Force (SPF) had earlier warned about the scam in an advisory, adding: "In some cases, the caller would initiate a video call through messaging applications while dressed in a uniform similar to SPF, and use publicly available photographs of police officers as their profile picture on the messaging applications."

Members of the public to take the following crime prevention measures:

The police also reminded the public to be vigilant and wary of "persons who may impersonate as police officers to facilitate the commission of their criminal acts."

Offenders found guilty of impersonating a police officer may face up to six months in jail and/or a fine of $2,500.

Related Stories
Scammer poses as CID officer in police uniform -- but look closely
Woman not fooled by scammer claiming to be from 'CID': 'This is Chinese name but you sound Indian'
Beware of new scam: Scammers impersonate police officers to ask for banking details
More About:
scam
funny