Victims respond to arrest of couple in $32m luxury goods scam: 'Half a burden off my chest' 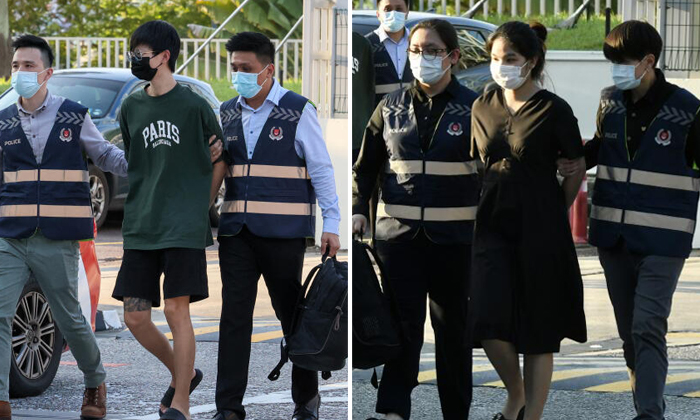 The couple allegedly involved in a luxury goods scam involving undelivered items worth $32 million have been arrested in Malaysia and are back in Singapore.

The Singapore Police Force said Pi Jiapeng, 26, and Thai national Pansuk Siriwipa, 27, returned to Singapore on Thursday (Aug 11) and will face charges of criminal conspiracy to commit cheating and illegal departure from Singapore.

Said the police: "The Singapore Police Force has been working closely with various foreign law enforcement agencies to secure the couple's return to Singapore. A warrant of arrest was issued against the couple on July 16."

SPF said they received information on Wednesday (Aug 10) from the Royal Thai Police the couple may be staying at a hotel in Johor Bahru.

Pi and his wife, Siriwipa, were handed over to the SPF on Thursday and will be charged in court on Friday.

At Woodlands Checkpoint on Thursday at about 6.15pm, Pi and Siriwipa were escorted by SPF officers carrying two black bags, believed to contain the personal belongings of the couple found at the hotel.

ST understands they were alone at the hotel when they were caught.

SPF added: "The Singapore authorities will do whatever is necessary and permissible under Singapore law to pursue and bring to justice those who commit crimes in Singapore, regardless of where they might have fled to. We will also not hesitate to take firm action against fraudsters."

One victim, Max (not his real name), who paid $280,000 for two Rolex watches and a Patek Philippe watch, said that when he heard the news of the arrests, he leapt for joy.

“I practically jumped up and told my wife the good news. I feel so relieved. It is half a burden off my chest. The other half is still weighing on me because I’m wondering if I can get my money back,” said Max, 48, who works in manufacturing.

Another victim, Cheryl (not her real name) paid $23,500 for a Rolex for her brother and was worried her money was as good as gone.

“Now that they are caught, there is hope again. I’m very much looking forward to getting some closure. I really hope all of us – the victims – can get our money back,” she said.

Cheryl added: “We are grateful to the authorities, including the ones overseas, for this. Without their help, we would not have known what to do.”

The authorities said last month the couple had fled Singapore in a container compartment of a lorry on July 4.

The police had earlier said Pi had been arrested on June 27 for his suspected involvement in cheating offences. His passport had been impounded and he was released on bail the next day.

Siriwipa was not arrested then but was assisting with police investigations. She had surrendered her passport on June 30.

The couple then became uncontactable and fled Singapore on July 4.

The police had said last month at least 180 reports have been lodged since June against the couple. Their victims claimed they had made advance payments for luxury watches or luxury bags to the couple, who failed to deliver them.

The Straits Times spoke to 15 victims in July, many of whom said they were regular customers of the couple's two businesses, Tradenation and Tradeluxury.

The Ministry of Law (MinLaw) said last month Tradenation was registered as a precious stones and precious metals dealer on April 2.

Registered dealers are regulated by the Registrar of Regulated Dealers only for anti-money laundering and countering the financing of terrorism purposes, said the MinLaw spokesman.

He added that at the point of registration, there were no grounds to refuse it.

MinLaw said it had suspended Tradenation's registration due to the ongoing police investigations.

Items customers had paid for but did not get include Rolex and Patek Philippe watches and Hermes bags.

ST reported last month that Siriwipa had allegedly conducted a similar ruse in Thailand and was investigated by the Thai authorities in 2019.