Victim of Buangkok sword attack recounts how he subdued assailant 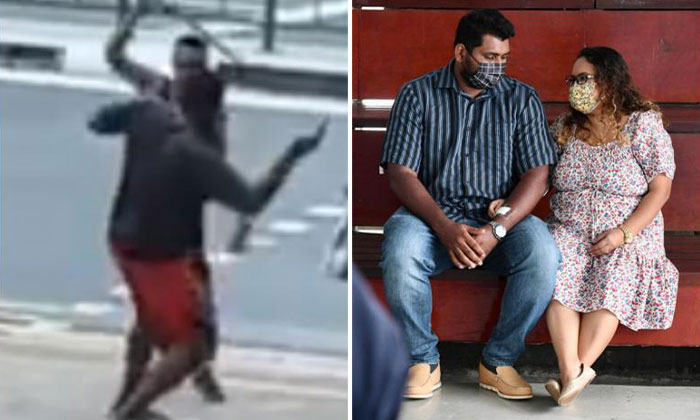 Mr Amila Chinthana, 35, was waiting at a traffic junction in Buangkok Crescent on Monday afternoon (March 14) when he saw a man swinging a sword in the middle of the road.

He started recording the incident on his mobile phone when the man turned on him.

"He just ran towards me and slashed me three times," said Mr Chinthana, who owns delivery service company Kingsmen Movers.

Despite being slashed, he managed to pin his assailant down after he slipped and fell, while another four men came to his rescue.

The five men, and a woman who called the police, were presented with the Public Spiritedness Award by the Ang Mo Kio Police Division on Tuesday (March 15), for restraining the armed assailant and stopping him from causing more harm to the public while waiting for the police to arrive.

Mr Chinthana, who told The Straits Times that he had been heading home after buying food for his pregnant wife, said he sustained a cut on his left shoulder that was longer than 10cm, as well as superficial wounds on his left hand and below his neck.

The assailant, Fadhil Yusop, 37, was charged on Wednesday with one count of voluntarily causing hurt by a samurai sword.

He had slipped after charging at Mr Chinthana, who managed to pin him to the ground after a struggle.

"It was very lucky that the floor was very slippery and he fell. I managed to get a grip on his two legs and held him down tightly," said Mr Chinthana, who also suffered bruises on his elbows and knees from tussling with his attacker

The Internal Security Department said on Tuesday that Fadhil had allegedly consumed some unknown pills prior to leaving his home with the sword.

After a brief altercation with members of the public at his lift lobby, he jaywalked across the road and allegedly used the weapon to hit five passing cars, said the police in a statement.

Mr Chinthana said he used his grocery bags to fend off the attacker, but did not think of fleeing despite the risk of getting seriously injured.

"I knew that I could run, but somehow, I was still standing there."

Mr Lim Jun Yi, 20, who was also at the traffic junction, came to Mr Chinthana's aid as he was wrestling Fadhil.

The Temasek Polytechnic student was on the way home after buying lunch from McDonald's and said he had not paid much attention to the man when he was obstructing vehicles on the road.

"I didn't want to bother. I just wanted to get home and eat my lunch," said Mr Lim.

But the electronic engineering major said he did not hesitate to help Mr Chinthana when the man attacked him aggressively.

"At that moment, I knew I had two choices. I could cross the road, or I could help him.

"When I saw the man strike him, I decided one thing for sure - I want to help him. As much as there were risks, I didn't give much thought to it. I just want to make sure that he's safe, and the man didn't hurt anyone else," said Mr Lim. 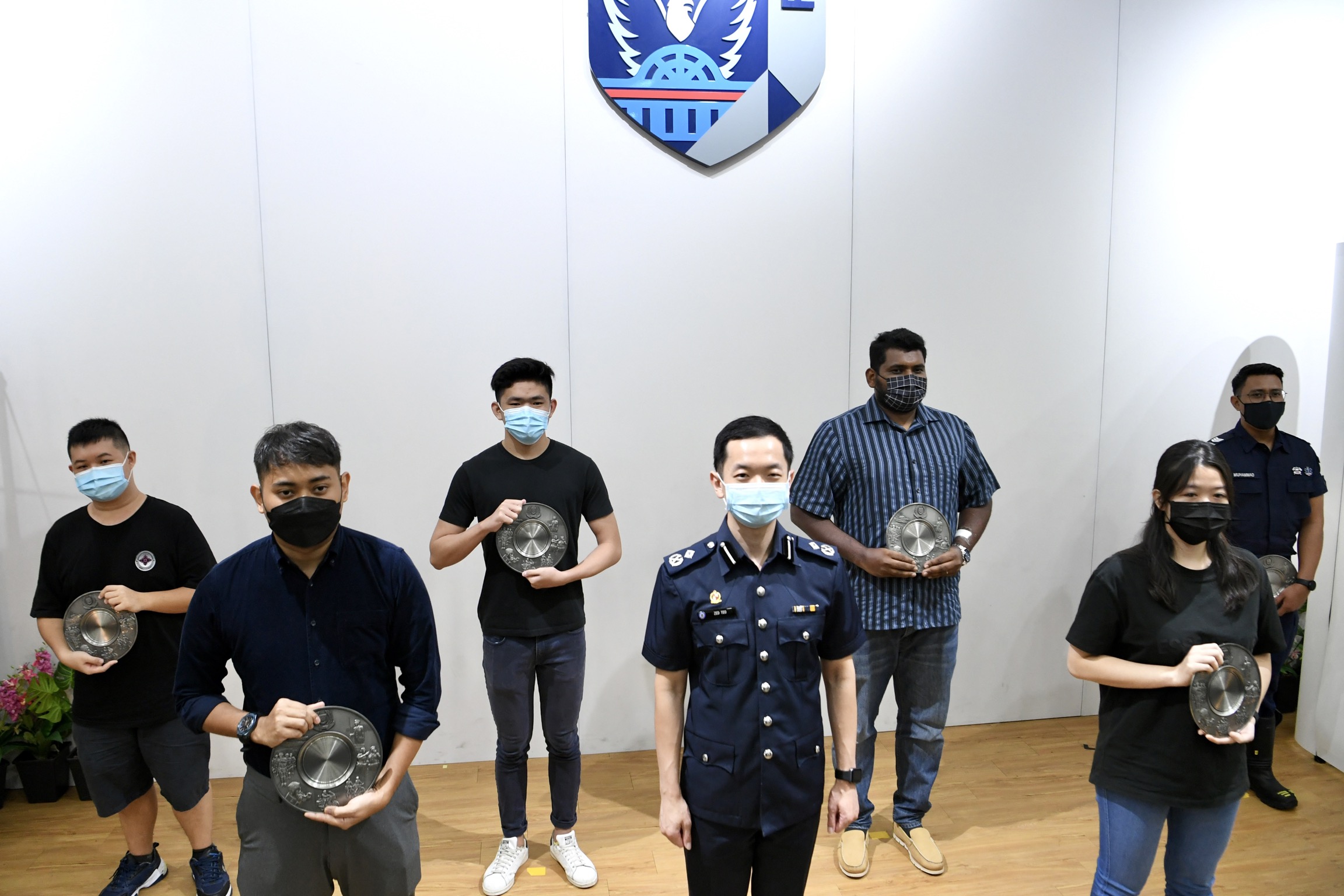 Colleagues Mr Rabbani, Mr Lim and Ms Koh Jia Xin, 28, had seen the man swinging his sword at vehicles on the road while on their way to have lunch at Buangkok Square Mall.

They did not approach him but kept him in their sights, and the two men rushed forward when the man attacked Mr Chinthana, while Ms Koh phoned the police.

One of the men later tossed the sword a safe distance away while the others pinned the assailant down.

Mr Naufal, a Singapore Civil Defence Force officer who happened to be in the vicinity, rushed to subdue the assailant when he attacked. 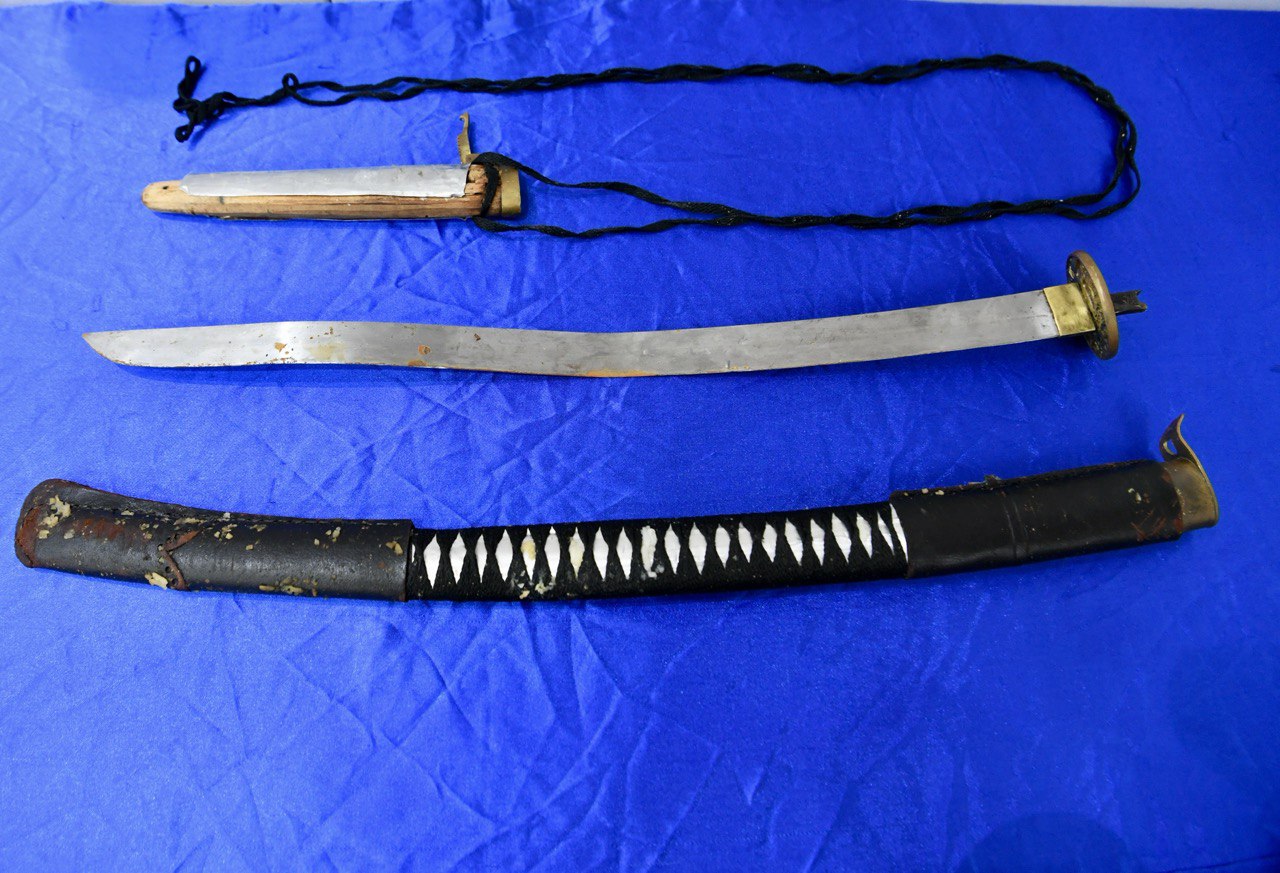 The sword used by the assailant. ST PHOTO: DESMOND FOO

On Tuesday, Mr Rabbani, a case manager at Angsana Home, said that the awardees agreed that it had been difficult to hold the man down as he struggled for a long time.

"Everyone deserves to live in a safe environment. For example, Mr Lim and Mr Chinthana are someone's son, someone's husband and someone's brother. They have a right to be safe no matter where they are," said Mr Rabbani.

Commander of Ang Mo Kio Police Division, assistant commissioner Zed Teo, said: "We are proud to have such everyday heroes in our community. Their actions demonstrate how the police work hand in hand with the community to keep Singapore safe and secure.

Praise and encouragement also poured in for them from family, friends and members of the public.

"I received over 500 calls and about 267 messages. Many people were offering me money and asking me how I was," said Mr Chinthana. The viral video of the incident had recorded Mr Chinthana reciting his mobile number.

Mr Chinthana, who is originally from Sri Lanka, said that the Sri Lankan news outlets had caught wind of the incident and approached him as well.

Mr Rabbani shared that his niece, who learnt of the incident through her mother, had messaged him: "You're my hero."

Mr Lim Jun Yi, who had received many words of praise from family and friends, said: "Some of my friends say I'm a national hero, but I don't feel so. I hope that anyone who was there would have done the same as well."