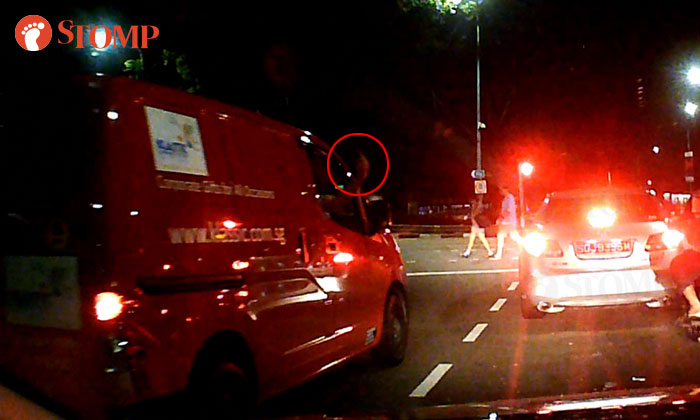 A van driver was caught on video flashing his middle finger at another motorist for apparently not giving way to him along Eng Neo Avenue on Feb 4.

Stomper RTSW shared footage with Stomp of the incident captured on his in-car camera at about 8.30pm.

He was driving along Eng Neo Avenue, before the Dunearn Road junction, when he saw the driver of the red van in front of him flashing his indicator lights to show his intention of changing lanes to the left.

"In the footage, I also slowed down in case he abruptly changed lane," said the Stomper.

"However, he didn't go so I went ahead.

"He wasn't happy and showed his middle finger in front of my family members, including my aged mother and teenaged daughter.

The Stomper told Stomp that he has since reported the incident to the driver's company, Klassic, indicated on the van.

Related Stories
'Mr Motorcyclist on SLE, why did you point middle finger at me?'
Not a single damn was given by this pedestrian who pointed middle finger at driver
Merc driver flashes middle finger after cutting queue and trying to block another motorist from parking
More About:
middle finger
van
road rage
impatient driver
rude