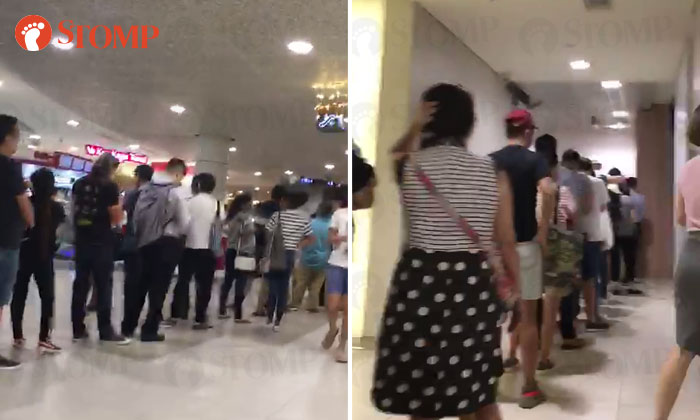 If you were at Plaza Singapura on Wednesday morning (Dec 4), you may have noticed a snaking long queue of people on the fourth floor of the mall.

"The shop opened at 11.30am but the queue had started as early as 8am," said Cyberpie.

"The queue was moving quite slowly but it was orderly."

Nicholas told Stomp that he gave up queueing after seeing how long the queue was.

"I tried to get my hands on the limited edition earbuds but I was shocked when I saw the queue," he said.

He shared with Stomp a video he recorded of the length of the line of people.

It took close to three minutes for him to reach the front of the queue as he followed the line around corners and past toilets and lift lobbies.

According to the UOB website, the Sennheiser earbuds come in a limited edition designer case by Thai street artist Rukkit Kuanhawate. It is worth $569.

The first 2,200 customers who have spent at least $6,500 locally and/or overseas with their UOB card from Nov 14 to Dec 31 are eligible to redeem the set.

Related Stories
Sasa announces closure in Singapore, so of course everyone is off to queue for sales
Parents camp overnight at Nafa to book art classes for their kids
Beauty sale at Jalan Kilang attracts long queue of shoppers and causes massive traffic jam
More About:
queue
long queue
Plaza Singapura