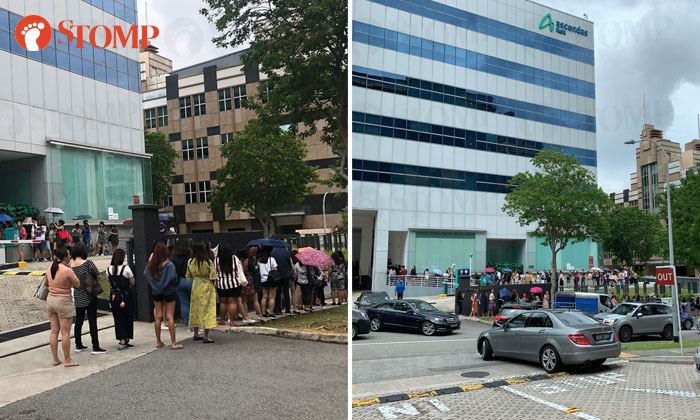 Stompers Kohji and Ryan, who both work in the area, alerted Stomp to the snaking long queue that had formed outside 1 Jalan Kilang.

Unfortunately, the huge turnout had caused a massive traffic jam.

"When I was about to reach my office which is at the next building at around 10am, there was already a jam with a queue," he said.

"I was stuck until almost 1pm."

Similarly, Ryan, who also works at a nearby building, said he was stuck in traffic from 11 to 1130am.

"This is an annual event so the same thing happens every year," he said.

"This year it seems worse because many people apparently arrived by Grab.

"I would advise those who want to come to take public transport.

"This has caused a huge inconvenience to the people working in the surrounding buildings.

"Vehicles cannot move as cars coming in are blocking cars that are going out."

The sale is organised by BeautyFresh, an online beauty store.

According to its Facebook page, shoppers can get branded fragrances, cosmetics and skincare products at up to 80 per cent off.

The sale started on Thursday morning and will run until Saturday, from 10am to 7pm.