Sasa announces closure in Singapore, so of course everyone is off to queue for sales 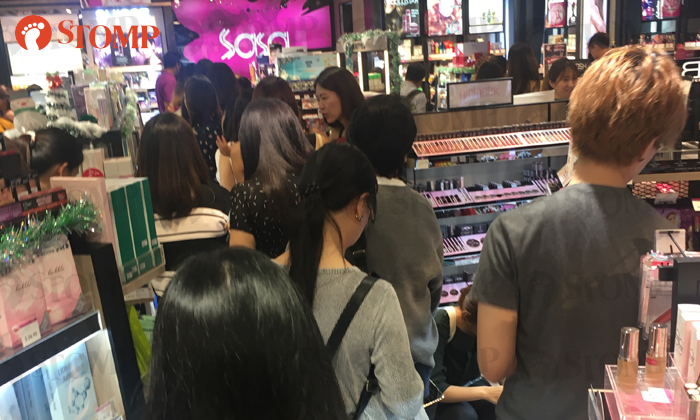 It's no secret that Singaporeans love to queue -- whether it's for new product launches, marked-down sales, to meet celebrities or even to buy lottery.

Naturally, the news of cosmetics retailer Sasa closing down all of its 22 outlets in Singapore has led to crowds flocking to get their hands on some good deals while they still can.

The Hong Kong brand said its decision came after its stores here recorded losses for six consecutive years despite efforts to turn the business around.

Stomper C said she was at Tampines 1 on Tuesday evening (Dec 3) when she noticed a long queue at the shopping mall's Sasa outlet.

She told Stomp: "I was passing by and decided to take a look to see if anything was different following the announcement.

"The whole store was very crowded and I had difficulty passing through the aisles. There was also a long queue at the cashier.

"I don't think Sasa has officially announced clearance sales yet or an exact closing date, but it seems like everyone has heard about its closure.

"I am a little baffled because prices aren't that reduced but then again, I myself did pop into the store, didn't I?"

The closure will affect around 170 workers, who have expressed surprised over news of Sasa's exit from Singapore.

According to The Straits Times, shop staff said they learnt about the exit from social media posts and media reports on Monday (Dec 2).

They also said Sasa's management had not said anything about the closure to them, whether they are being retrenched or when the shops will pull down the shutters for good.