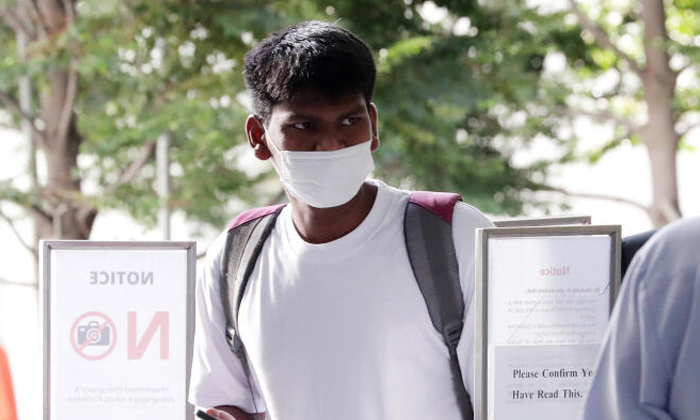 A foreign worker who felt unwell and was taken to the Singapore General Hospital (SGH) disobeyed orders after he was told not to leave the premises, in May last year.

Balachandran Parthiban left the hospital grounds before taking a bus and a taxi to Changi Airport, where he tried but failed to buy a ticket home.

The police later caught him, and he tested positive for Covid-19 the next day.

After he was found to be no longer infectious the following month, Balachandran broke the law again and unlawfully left his dormitory, which the Government had gazetted as an isolation area.

The 26-year-old Indian national was on Monday (July 12) sentenced to nine months' jail after he pleaded guilty to two charges under the Infectious Diseases Act.

In his submissions, Deputy Public Prosecutor Norman Yew said Balachandran's was the most egregious case of its kind, adding: "Instead of returning to the hospital or his dormitory after failing to buy a flight ticket to India... he chose to loiter at Changi International Airport and he increased the risk of spreading Covid-19."

Balachandran was living at the Jurong Penjuru Dormitory 1 in Penjuru Place when the Ministry of Health declared it an isolation area on April 18 last year.

He felt unwell on May 23, and reported sick at his dormitory in the morning. He suspected he had Covid-19 as he knew of dormitory mates who had come down with the infection.

An ambulance took him to SGH, where he went through a swab test. At around 1.40pm, he was transferred to a fever screening area at an SGH multi-storey car park to wait for his results.

Nurses then repeatedly told him in English and Tamil that he could not leave the premises until the results were ready. He had to inform hospital staff if he wanted to go anywhere.

But Balachandran left the premises, walked towards Tiong Bahru and boarded a public bus.

He alighted two stops later and took a taxi to Changi Airport where he tried but failed to buy a ticket home.

He then loitered around the airport for about four hours before police officers found him and he was taken back to SGH.

The taxi driver was issued a home quarantine order for 14 days and eventually tested negative for Covid-19.

Balachandran was discharged from SGH on June 8 last year and was sent back to his dormitory, where he was to remain during 14 days' leave of absence.

But he left the dormitory around 6am eight days later with his passport and two bags as he wanted to return to India.

He took a taxi to Changi Airport and again failed to buy a ticket home. He then slept at the airport and went to a relative's flat in Tampines the next day, on June 17.

He later came clean to his relative, who alerted Balachandran's supervisor. The police arrived at the unit at around noon the same day and Balachandran was taken back to the dormitory.

In a mitigation plea, they stated that Balachandran had adjustment disorder.

The lawyers added: "While the case law is clear that such a mental affliction is not strictly mitigating, we nevertheless plead for the court's compassion that (Balachandran) was someone who had suffered 'cabin fever' while stranded in a foreign land with next to no financial or psychological support."

For each offence under the Act, an offender can be jailed for up to six months and fined up to $10,000.