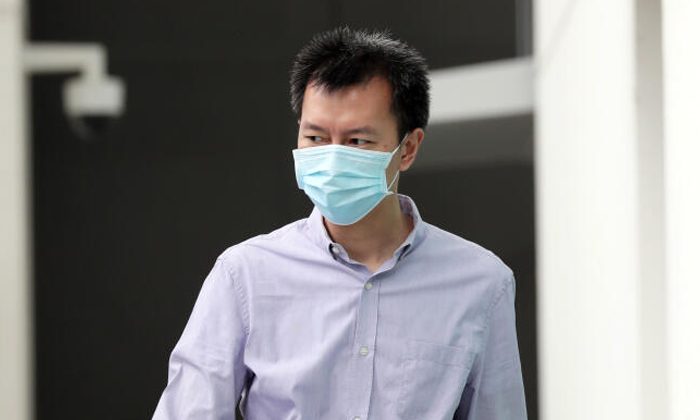 A United States citizen, who welcomed his 38th birthday while serving his stay-home notice (SHN) in a Singapore hotel, broke the law and left his room twice to meet his wife amid the Covid-19 outbreak.

Deputy Public Prosecutor Timotheus Koh told a district court on Thursday (June 24) that Bai called his wife, Ms Li Juan, from the Fairmont Singapore hotel on his birthday and asked her to bring a cake.

The DPP added that Bai then left his room around 7pm and met Ms Li in a car before returning to his room about five hours later.

The solutions architect was sentenced on Thursday to seven days' jail after he pleaded guilty to an offence under the Infectious Diseases Act. A second charge under the same Act was considered during sentencing.

It was not mentioned in court if action will be taken against his 41-year-old wife.

DPP Koh said that Bai arrived in Singapore from China on Sept 19 last year after transiting in Hong Kong.

He then served his SHN here from that day to Oct 3 last year.

Instead of remaining in his room on Sept 19, Bai met his wife, who picked him up in a car.

The Straits Times had earlier reported that the couple then spent about an hour and 40 minutes together in the vehicle in the vicinity of the hotel.

The next day, the pair spent about five hours together in the car.

Defence lawyer S.S. Dhillon told the court on Thursday that closed-circuit television footage showed that his client wore a mask "at all times while outside his hotel room".

The lawyer from Dhillon & Panoo law firm also said that Bai had tested negative for the Covid-19 virus before he boarded his flight to Singapore.

In an earlier statement, the Immigration and Checkpoints Authority (ICA) said: "All travellers are to comply with the prevailing public health regulations and requirements in Singapore."

Foreigners who breach the requirements may face further administrative action by the ICA or the Ministry of Manpower, and may have their permits and work passes cut short or revoked.

For breaking the law under the Act, an offender can be jailed for up to six months and fined up to $10,000.

Related Stories
Jail for Briton and S'porean wife who met in Ritz-Carlton hotel where he was serving SHN
British man under SHN who left hotel room without mask to meet fiancee to be charged
Housewife from Safra Jurong Covid-19 cluster fails to disclose meetings with male friend, gets jail
More About:
court
Covid-19
couple
hotel