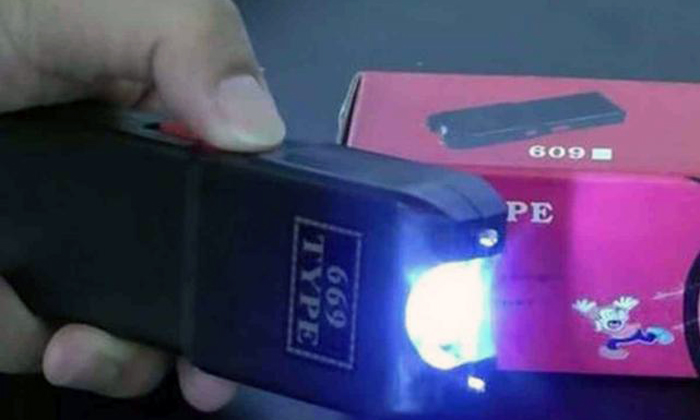 Two men were arrested after one of them tried to use a stun gun on police officers on Tuesday (Jan 10).

The Police detailed in a Facebook post that at about 11.51 am, they were alerted to a case of unknown persons banging on the door of a residential unit in Yishun housing estate.

Officers from the Ang Mo Kio Division were conducting ground enquiries when they spotted both suspects behaving suspiciously at a carpark.

The suspects, one aged 21 and the other 24, were believed to be attempting to steal from a car.

When officers approached the suspects, the 24-year-old man turned aggressive and attempted to use a stun gun on the officers.

The two suspects were arrested on the spot for unlawful possession of a stun gun.

Preliminary investigations also revealed that the suspects are believed to be involved in other criminal cases.

The 24-year-old and 21-year-old suspects will be charged in Court on Jan 11 and Jan 12 respectively.

Under the Arms and Explosive Act, Chapter 13, anyone found guilty of unlawful possession of arm without a licence may be punished with a fine not exceeding $5,000 and imprisonment for a term which may extend to 3 years

Related Stories
Plainclothes policeman draws gun for safety during Geylang raid -- then gets challenged by man to shoot him
Policewoman blacks out after man pushes her head and kicks her back near Penjuru Road
25-year-old man arrested after acting tough with elderly taxi uncle at Woodlands St 83, then arguing with policemen
More About:
arrest
police
stun gun