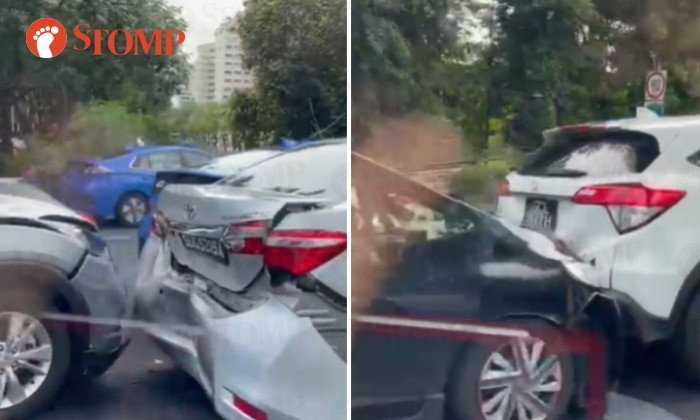 Two separate accidents happened along the Pan Island Expressway (PIE) towards Tuas, before Eunos exit on Sunday (Dec 13), leading to a chain collision with six road users being taken to hospital.

In response to a Stomp query, the police said they were alerted to two separate traffic accidents at 12.06pm.

"The first accident involved six cars. Two passengers from one of the cars, a 44-year-old female and a 50-year-old male, were conscious when conveyed to Changi General Hospital," said the police.

The second traffic accident involved two cars and a taxi.

"One of the car drivers, a 39-year-old female and her 8-year-old female passenger, were conscious when conveyed to KK Women’s and Children’s Hospital," added the police.

"Two other female passengers, aged 42 and 73, were conscious when conveyed to Changi General Hospital."

A video taken of the aftermath of the accident has been circulating on social media, showing a row of nine cars piled up one after another.

The video appears to be taken from a vehicle that was passing by the accident scene.

A woman can be seen hugging a young child as she sits in the driver's seat of the last car involved in the chain collision.

The video then pans to the next car, showing its rear completely smashed.

The other vehicles involved in the accident appear to be a BlueSG car and a ComfortDelGro taxi.

At the end of the video, a BMW car can be seen ahead of the nine-car pile up.