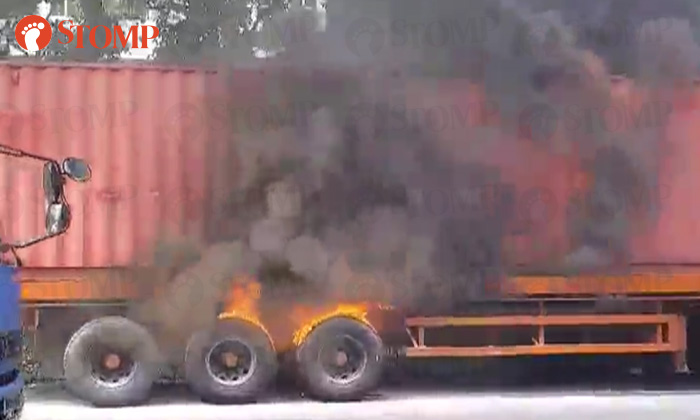 A truck caught fire along the Pan-Island Expressway (PIE) towards Tuas before Paya Lebar exit at about 11.30am today (Jun 5).

Stomp was alerted by several Stompers to this incident.

Stomper Wilson said he was driving towards Jurong on the PIE at about 12.30pm when he witnessed the trailer on fire.

In a video shared by Wilson, the trailer's wheels appear to be on fire and fumes of black smoke are seen coming from it.

Stomper Michael who was also driving along the PIE, said he saw the fire at about 11.36am. He also noted that a traffic warden was present at the scene, although he thought that "not much can be done by the warden with only one fire extinguisher".

In response to a Stomp query, the Singapore Civil Defence Force (SCDF) said that they were alerted to a vehicle fire at about 11am.

"The fire involved a tyre of a truck.

"It was extinguished by the SCDF using two compressed air foam bag packs and a water jet.