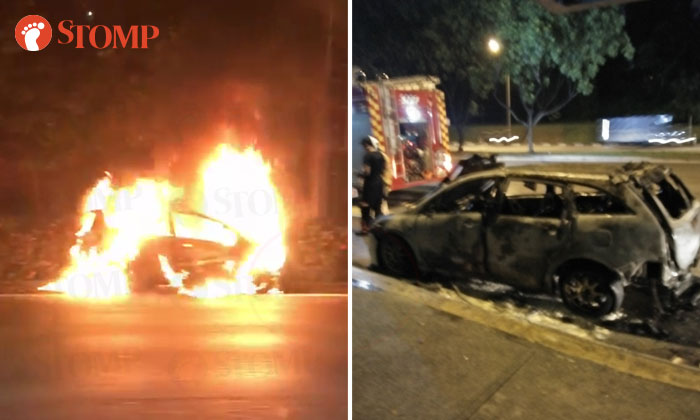 Two cars caught fire on Friday evening (April 28), one at Adam Road and another along the Ayer Rajah Expressway (AYE).

Stompers Yazid and David alerted Stomp to a car that had caught fire near a bus stop along Adam Road.

In response to media queries, the Singapore Civil Defence Force (SCDF) said it was alerted to a vehicle fire at Adam Road towards Farrer Road at about 7.30pm.

It extinguished the fire using a water jet.

Yazid commended the SCDF for its quick response.

"They reached the location well under 10 minutes upon receiving a call," he said.

The fire was put out in five minutes.

Stomper Freddie alerted Stomp to another car that had caught fire on the leftmost lane of the AYE, towards Tuas.

The SCDF were alerted to the fire at about 8.50pm and extinguished it within five minutes with a water jet and hose reel.

There were no reported injuries and the cause of the fire is under investigation, reports The Straits Times.

These two incidents came after an earlier Stomp report on a lorry that was engulfed in flames on a slip road into the Pan Island Expressway (PIE), towards Tuas at around 7.54am the same day.