Truck driver 'sped up to stop me from filtering into lane', threw object and pointed middle finger 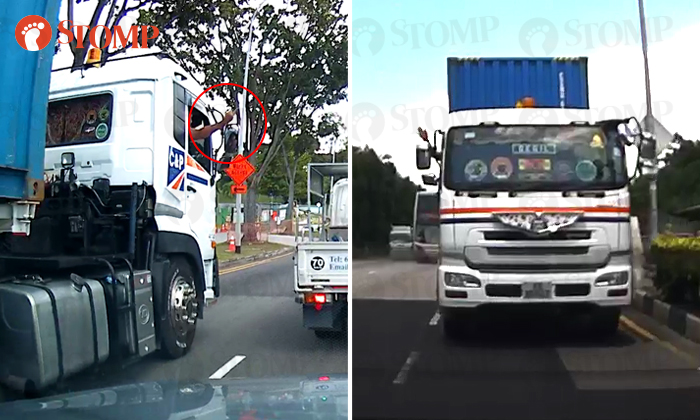 A truck driver was caught on camera pointing his middle finger at Stomper Tan during a road dispute along Woodlands Avenue 3 on Tuesday (Mar 17).

Tan submitted dashcam footage of the incident that occurred at around 11.26am.

The Stomper said: "I was trying to filter into the left lane, but this container truck driver saw me and intentionally sped up to prevent me from filtering into his lane.

"After that, he threw an object towards my car and pointed his middle finger. Luckily, that black object did not hit my car.

"He passed my car along Woodlands Central Road and I think he spat on it as there were spit marks on my left passenger windows.

"He then flashed his middle finger again after passing my car.

"I would like to appeal for the driver of the champagne gold Lexus car behind me along Woodlands Central Road to come forward if he has a video of the spitting."

Tan said he lodged a police report on Thursday (Mar 19).