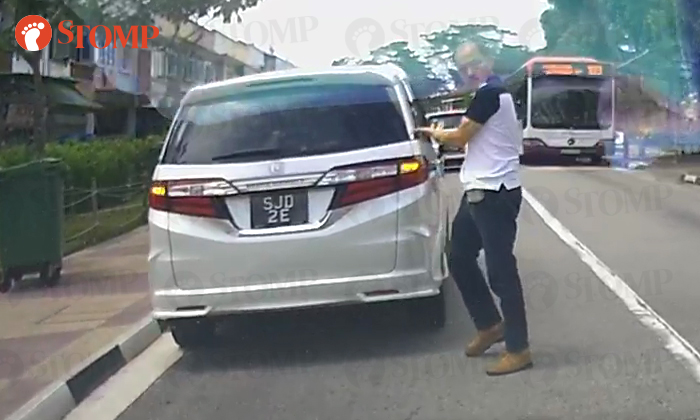 A Honda driver caused traffic obstruction by stopping along a two-lane road and instead of seeming apologetic, made various gestures at Stomper Herbie.

He recounted: "This uncle driving a Honda Odessy stopped along the two-lane road and caused a jam on one side of the road.

"There was oncoming traffic behind him and from the other side of the road, but he simply couldn't be bothered about causing the jam.

"When I drove past him to tell him that he was causing a traffic jam, he gestured at me to move on and as if to say, 'What's wrong?'

"Uncle, everything is wrong. From your actions to your attitude."

It is unclear how long the Honda driver had been stopped at the roadside as he was already there when Herbie arrived.

The Stomper added: "I will be reporting this to the Traffic Police too."

Related Stories
Van driver flashes middle finger and beats red light after refusing to give way at Boon Tat Street
Man runs across road during red light -- and still has the cheek to point middle finger at driver
Mercedes driver stops by roadside to confront man after getting honked at
More About:
road rage