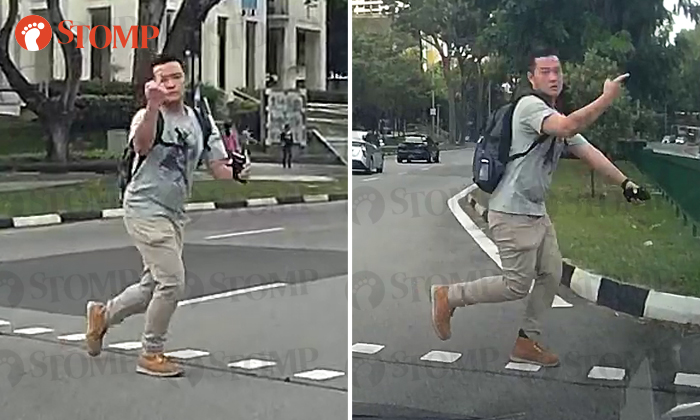 A pedestrian tried to make a dash across the road even though the traffic light had already turned from green to red -- then flashed his middle finger at a driver who stopped for him.

Stomper Anonymous contributed dashcam footage of the incident that occurred at Lower Delta Road on Friday (Jan 10), at around 8.39am.

In the video, a man can be seen running across the road when the traffic light's countdown timer and the green man were flashing.

He continued doing so even when the traffic lights turned red, but was stopped in his tracks by the Stomper's oncoming car.

Anonymous stopped his car for the man, only for the latter to flash his middle finger.

The man can then be seen staring at Anonymous as he picked up his sprint across the road again.

Asked how he thought about the incident, Anonymous told Stomp: "I felt offended as I had already done my duty and stopped for him even though the green lights had turned red.

"I know I should stop whatever it takes, but the pedestrian shouldn't point middle fingers no matter what. I don't see any appreciation for that."

Anonymous also said that he is unsure of what sparked the man's behaviour.

He added: "I didn't honk at him as I had my wife and child in the car with me.

"He was probably in shock when I jammed on my brakes.

"But still, I've done my part as a driver to prevent accidents by looking at both sides of the road before I accelerated further.

"Luckily, I was alert enough to stop in time but what if other motorists are unable to perform an immediate brake and knock him down? Things will be more complicated.

"Therefore, I want to reach out to people and say that even when you are in a rush, make sure you know when to cross roads, especially at traffic junctions which are even more dangerous as there's a lot of looking out to be done before anyone else proceeds."