Tree falls on Mercedes and smashes railing during heavy rain, flash floods in parts of Singapore 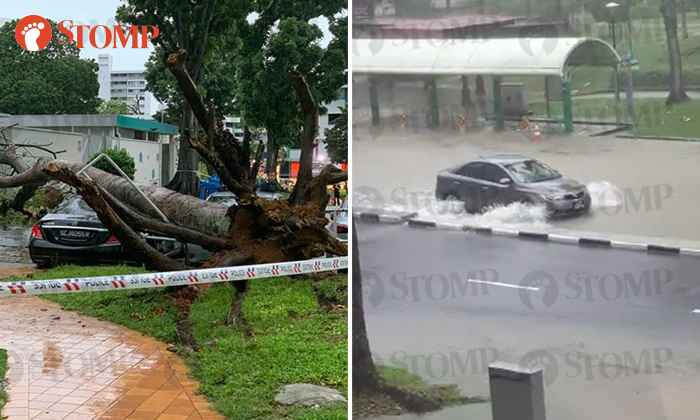 A heavy downpour on Monday (Dec 2) resulted in flash floods in the western region of Singapore and an uprooted tree in Bedok.

In a tweet at 2.39pm, the National Environment Agency (NEA) warned of "moderate to heavy thundery showers with gusty wind" in many areas of Singapore during the afternoon.

Heavy rain warning - Moderate to heavy thundery showers with gusty wind are expected over many areas of Singapore between 3.15pm and 4.15pm. PUB says flash floods may occur in the event of heavy rain.

Stomper Shilpi contributed photos that show a fallen tree lying across the road at Block 547 Bedok North Street 3 and the area being cordoned off by the police.

The tree had fallen on a black Mercedes-Benz that was parked at the Housing Board (HDB) carpark and damaged a metal railing.

Shilpi, a resident at the block, added: "If the tree had fallen on the other side, it would have hit my house already."

In photos circulating on Facebook, which Stomper Ah Boy alerted Stomp to, police officers and police cars can be spotted at the scene.

"The police were helping to direct traffic, and there were town council people helping to coordinate the clean-up effort," a witness told The Straits Times, adding that no one appeared to be hurt.

According to Stomper Shilpi, the tree was cleared at around 9.15pm.

She shared a video that shows workers in action and a crane at the scene.

According to national water agency PUB, its officers were deployed to Jurong East Street 32 and Choa Chu Kang Avenue 1 to investigate and render assistance following flash floods caused by intense rain at 3.20pm.

"The heaviest rainfall of about 93mm was recorded over one hour in the western part of Singapore. This is about a third of the projected average rainfall of 318.6mm for the month of December."

The PUB also said that more wet weather is expected this month as Singapore is currently experiencing the Northeast Monsoon period.

In the first week of December, Singapore can expect a monsoon surge lasting from two to four days, with periods of moderate to heavy showers over the island.

"We urge the public to exercise caution and avoid stepping into or driving into flooded areas. They should stay tuned to radio broadcast and check PUB's Facebook or Twitter pages for flood updates," said the PUB.

Stomper Niroshan, who shared a video of flash floods occurring in Teck Whye, said: "Please ask everyone to be safe.

"I saw many food delivery riders still working in the heavy rain.

"Please let everyone be safe!"