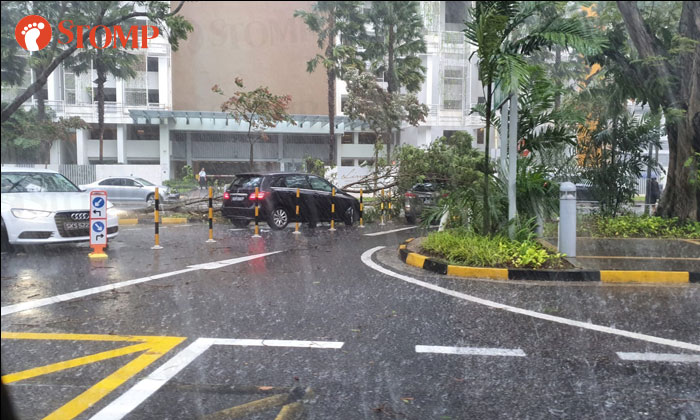 A tree that fell across a road caused a traffic jam outside United Square shopping mall on Saturday (May 4).

Stomper Amanda alerted Stomp to the incident and shared photos of the fallen tree.

"We were lucky as my car was just a few cars away."

She said that because the exit from the mall was blocked, she was asked to drive up to the mall's carpark to go through another exit.

"It was chaotic as many cars were stuck during the peak period due to students being released from tuition centres at 1pm," she said.

"The poor security personnel had to redirect traffic under the heavy rain."

Amanda added that she was stuck in the mall's carpark for more than 20 minutes as many vehicles were trying to leave via the alternate exit.

"We were considered lucky to leave early as we were in front of the carpark entrance towards the other exit," she said.

"There was a long queue behind us waiting to turn to the pick-up point before driving up to the carpark and leaving the same exit as us.

"Those behind us would have been stuck for much longer."

Stomp understands the fallen tree was removed later that day.