Trailer that overturned at BKE: Video shows how it happened 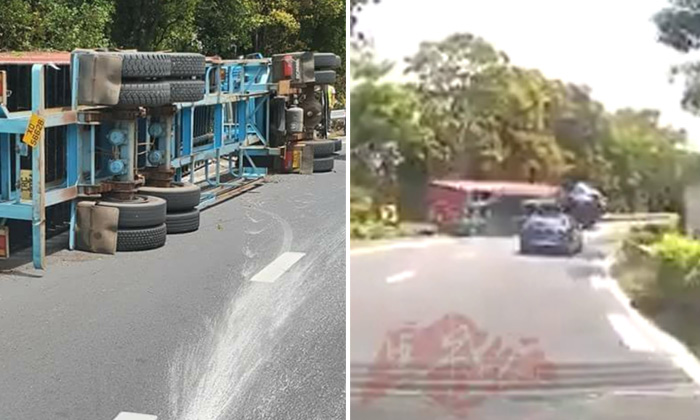 A video has surfaced showing how a trailer overturned at a slip road along Bukit Timah Expressway (BKE) heading towards Seletar Expressway (SLE) on Oct 10 at about 11am.

Stompers Mike and Dean shared with Stomp a video showing the trailer overturning and falling on its side while making the turn.

The accident was reported in an earlier Stomp article, where Stompers Mike and Rashid shared photos of the accident with Stomp.

The video was also shared by on Facebook page Beh Chia Lor - Singapore Road by Boon, a member of the group.

In the video, the container that was on the trailer appeared to tilt to the side as the trailer was turning.

"The weight inside the container must have shifted to the left while the trailer was turning," said Mike.

"From the video, I can see that the container toppled first, and dragged the trailer along with it.

"The bend at that slip road is quite sharp."

Stomper Dean, who received the video via WhatsApp group, also said: "This is too reckless already."

Netizens also acknowledged the sharp bend at the slip road in the comments section of the Facebook post.

In response to a Stomp media query on Oct 10, the police said that investigations are ongoing.