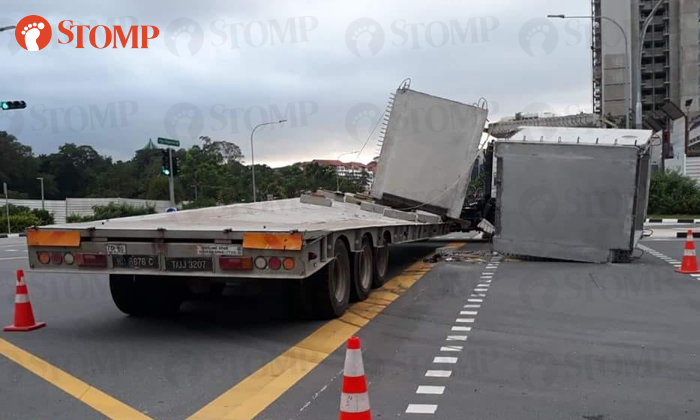 A 30-year-old trailer driver was arrested after he got into an accident along Bidadari Park Drive, towards Upper Serangoon Road, on Saturday morning (July 14).

Stomper Ah Boy alerted Stomp to photos of the accident that have been circulating online.

The trailer appeared to be tilted towards one side. Cargo from the trailer had gotten dislodged and can be seen lying on the road.

Stomp understands that the trailer driver had been trying to make a u-turn when the accident happened. No other vehicles were involved.

In response to a Stomp query, the police said they were alerted to the accident at 7.07am.

"The driver, a 30-year-old man, was arrested in relation to the case," a police spokesman told Stomp.

Stomp understands that the driver is a Malaysian.

He was arrested and taken to the Traffic Police Headquarters to process his summons.