Traffic controller, 72, dies after being run over by truck in Lim Chu Kang 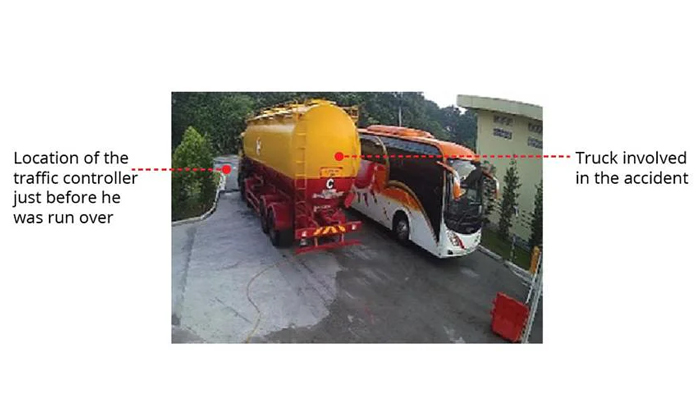 A 72-year-old Singaporean traffic controller died on Aug 16 after he was hit by a truck in Lim Chu Kang.

The accident took place at about 7.30am at a farm located at 150 Neo Tiew Road and owned by Chew's Agriculture.

According to an alert from the Workplace Safety and Health (WSH) Council on Wednesday, the truck had stopped at the main gate of the farm in order to exit to the main road.

The traffic controller employed by the farm moved to the left of the truck to get the driver's attention, before moving to the front of the vehicle, the WSH Council said.

It was then that the truck suddenly moved forward and ran over the worker.

The Ministry of Manpower (MOM) said in response to queries that the worker was taken to Khoo Teck Puat Hospital where he died.

"Traffic controllers should be extra alert and sensitised to the dangers when they have to manage the blind spots of heavy vehicles," MOM said.

The fatal workplace accident was the 33rd this year.

With the death of a Bangladeshi worker who fell into the sea on Monday after part of a concrete pier in a Tuas shipyard collapsed, the total number of work-related deaths this year is now at least 34.

In its alert on Wednesday, the WSH Council said poor traffic management can lead to workplace fatalities or serious injuries.

It cited a similar accident on April 27 this year, when a 39-year-old Indian national was run over by a prime mover that he had parked on a ramp at a building in Yishun.

The council recommended that companies here develop and implement a traffic management plan to facilitate the safe movement of vehicles and pedestrians, especially at gates, and to carry out risks assessments on the possible traffic movements.

Routes to be taken by vehicles, workers and visitors should be indicated clearly using road markings and traffic signs. Convex mirrors should also be placed at strategic locations to help drivers see around blind spots, the WSH Council added.

Meanwhile, traffic controllers should be trained, equipped with highly visible reflective vests, and be given additional means to communicate with drivers, such as a loud hailer or a public address system.

Traffic controllers should also be provided with a safe work location, and they should be instructed to not move in front of a vehicle if its engine is running and communication with the driver has not been established.

The WSH Council also urged companies to consider using vehicle-mounted cameras that allow drivers to better monitor blind spots, or to deploy sensors that can warn drivers of the presence of an object or person in the vehicle's blind spots.

Related Stories
2 workers fall into sea after part of pier gives way at Keppel Shipyard in Tuas, 1 still missing
Tow truck driver dies after being pinned between pillar and bus in Kranji
Worker dies after getting run over by prime mover that he parked on Yishun ramp
More About:
dead
death
accident
fatal accident
worker
worksite
workplace accident