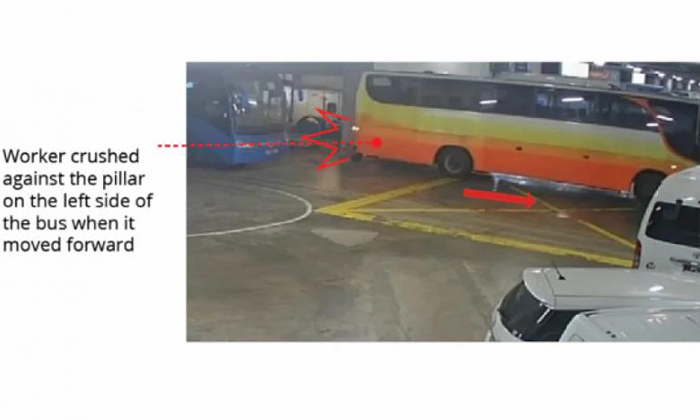 A tow truck driver died on Aug 3 after he was pinned between a bus and a pillar at a private transport interchange in Kranji.

This takes the total number of work-related deaths in Singapore this year to 32.

In response to queries from The Straits Times, the Ministry of Manpower (MOM) said the worker, a Chinese national aged 43, was guiding the bus into position next to a pillar at the interchange located at 60 Jalan Lam Huat, the address for mega auto facility Carros Centre.

The accident took place at about 11am.

According to an alert issued by the Workplace Safety and Health (WSH) Council on Wednesday (Aug 10), the worker was standing next to the pillar while guiding the bus, which was reversing into what appears to be a bus parking space at the interchange occupied by ComfortDelGro Bus.

After reversing, the driver of the bus moved the vehicle forward to reposition it, but this led to the worker being crushed, said the WSH Council.

The worker was employed by Singapore Towing Equipments. He was taken to Khoo Teck Puat Hospital, where he died, MOM said.

The ministry is investigating the accident, and said it has instructed Singapore Towing Equipments to stop all towing of vehicles from non-public roads and buildings.

Said MOM: "As a general safety measure, when guiding the movement of vehicles in tight spaces, employers and supervisors should carry out safety assessments and communicate safety pointers clearly to the workers performing the task.

When contacted, a manager at Singapore Towing Equipments, who declined to be named, said the worker who died was an experienced tow truck driver who joined the company in February.

The manager also said he is not exactly sure what had happened, adding that he has not been given the full details by the authorities.

The bus driver involved in the accident has also been suspended, and is assisting the authorities with investigations.

Ms Tan added: “We are deeply saddened by this accident.”

With this latest accident, the number of work-related deaths recorded this year has exceeded the 30 workplace deaths reported in the whole of 2020.

Last week, the issue of workplace safety was raised by Radin Mas MP Melvin Yong in Parliament as he called for more action to be taken to beef up workplace safety in the light of an alarming rise in workplace fatalities and injuries post-Covid-19.

The authorities have also been repeatedly urging companies and workers here to take safety seriously since May, when a two-week safety time-out was called and Prime Minister Lee Hsien Loong warned about slipping safety standards and practices.

In an interview with The Straits Times on July 29, Manpower Minister Tan See Leng had said that monitoring at work sites has been stepped up in response to the recent spate of fatal accidents. This includes a review of the monitoring system here.

Some ideas include a framework to take employers and supervisors to task with suspension and demerit points, he said, and even real-time surveillance at very high-risk work sites to aid learning from potential safety lapses and near-misses.