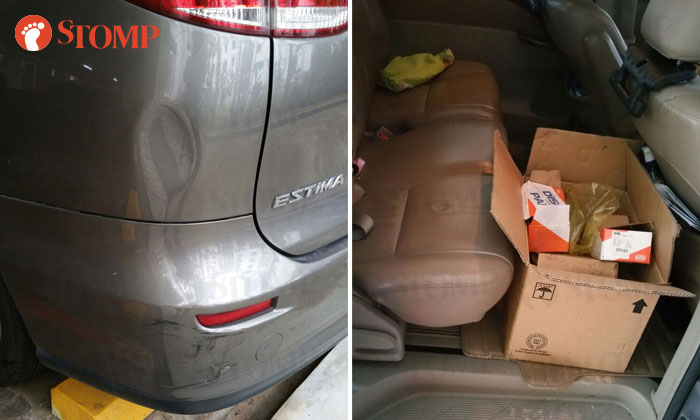 A Toyota Estima that went missing after its owner sent it to be repaired at a workshop at Sin Ming Industrial Estate has been found.

Stomper Allan informed Stomp that the police called him to tell him his car had been found at a private estate near the workshop yesterday (Mar 6) at around 6pm.

Previously, Allan had posted an appeal on Stomp to netizens to help him keep a lookout for his car.

He had sent it in for a water leakage problem but when he was told that there was an issue with the engine and received an invoice for $4,500, he refused to pay.

"I insisted that my car was under warranty and that I would not pay for the repair," he said.

Shortly after, his car went missing after the workshop worker told him he would not release the car until Allan paid up.

Allan told Stomp today (Mar 7) that although he is happy to have gotten his car back, he is concerned about the condition it came back in.

"There is a dent and scratches on the left rear of my car," he said.

He added that the car had been driven an additional 975 km since he sent it to the workshop.

However, the most mysterious of all is that a bunch of spare car parts were found in the back of his car.

"The car parts belong to a BMW and MINI Cooper according to a car mechanic," he said.

"I suspect that the workshop personnel was using my car for transport."

Allan, who made a police report when his car went missing told Stomp that he is going to make another one with regards to the condition his car is in.

In response to Stomp's media query, a police spokesman confirmed that a police report has been lodged.

Related Stories
FOUND: Car went missing after being sent to workshop at Sin Ming Industrial Estate
Man in Malaysia gets caught stealing car, tells owner that it belongs to him
Armed thieves try to steal vehicle during car wash -- only to get owned big time by owner's hose
More About:
lost
car
bad service
found
damage