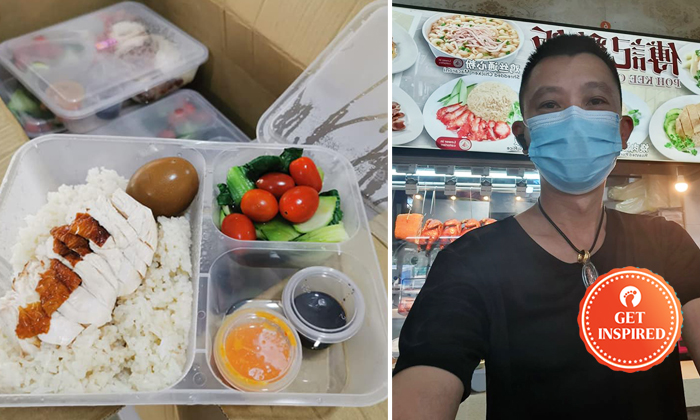 Joy and kindness are some things that you get back multifold when shared, as one chicken rice stall owner in Toa Payoh can attest to.

Despite his business taking a hit due to the Covid-19 situation, Michael Poh of Poh Kee Chicken Rice has been giving back to the community and been on the receiving end of kindness too.

In the post, Michael shared how a regular patron had offered to order chicken rice bento boxes in bulk to donate to Tan Tock Seng Hospital.

This would allow Michael to have some earnings too at the same time.

Michael agreed and offered to throw in a free egg with every bento set. The eggs are all paid for out of his own pocket.

He added in his post: "After I posted that I would contribute an egg for every single pack of chicken rice bought from me for donation to society, a few of my friends offered to contribute to the cause too."

Now that he had some funds, Michael decided to 'upgrade' the bento boxes by using vegetables of a better grade and adding in cherry tomatoes.

"I hope that will make a fuller and better meal to whoever is on the receiving end," wrote Michael, who also thanked those who contributed to his 'Egg For A Cause' project.

He said: "I can only help by shaving my profits and give my best in what I do best: Cooking."

Heartened by his efforts despite the challenges of keeping his business running amid the coronavirus pandemic, Stomp reached out to Michael to find out more about the initiative.

According to Michael, he will be preparing another 100 chicken rice bento boxes for a kind soul who wants to donate them to Singapore General Hospital on Friday (May 15).

He told Stomp: "Previously, I also prepared the bento sets for YMCA to distribute to the elderly."

Michael also said that he charges the minimal cost for the bento sets in spite of including a free egg, more meat and better vegetables.

However, he insists that he is "not that great a person".

During his conversation with Stomp, he repeatedly makes it clear that he still earns a little from the bento boxes.

"I'm not the only person helping. All I do is give the lowest pricing possible. Even though I make low profits, but there's still a profit," he said.

"My business has been very affected despite me operating extended hours from 8.30am to 8pm. It's a two-way thing because people are helping me too."

Nevertheless, Michael continues to give back to the community.

For individuals dropping by to get a simple takeaway meal from Poh Kee Chicken Rice, do not be surprised if you find more than what you paid for in your meal.

Asked if anyone in need has ever approached him for a free meal, Michael shared: "Nobody has asked for free chicken rice yet, but sometimes I give my customers more meat and a free egg."

The humble stall owner also generously offered to treat this writer to chicken rice because it is his birthday today (May 14).

Not being in need, I declined his kind request.