Why did these 2 cars suddenly jam on brakes, causing driver to collide with one of them? 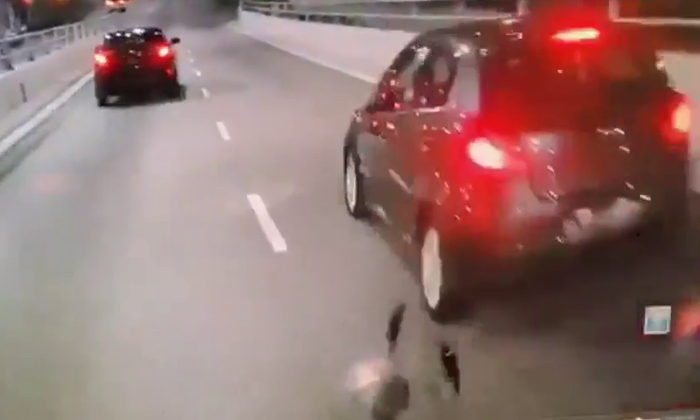 A motorist was involved in a collision after two cars travelling in front of him suddenly jammed on their brakes for no apparent reason.

ROADS.sg posted a video of the incident, which occurred along the Keppel Viaduct towards VivoCity on July 22, at around 10pm.

The motorist who recorded the video said he had been travelling down a slope towards Keppel Road when the driver of a red car "played the braking game and caused this accident".

In the video, the car cam driver is seen travelling behind a dark grey car that suddenly slowed down.

Swearing, the car cam driver then switched to the leftmost lane and ended up behind the red car.

Both vehicles travelled on the lane for some distance until the red car appeared to brake abruptly.

The car cam driver tried to brake and swerve, but ended up colliding with the dark grey car.

The two of them then stopped by the roadside, though the red car continued on its way.

The unusual accident has led to netizens speculating about what happened.

However, many felt that the car cam driver was equally to blame.