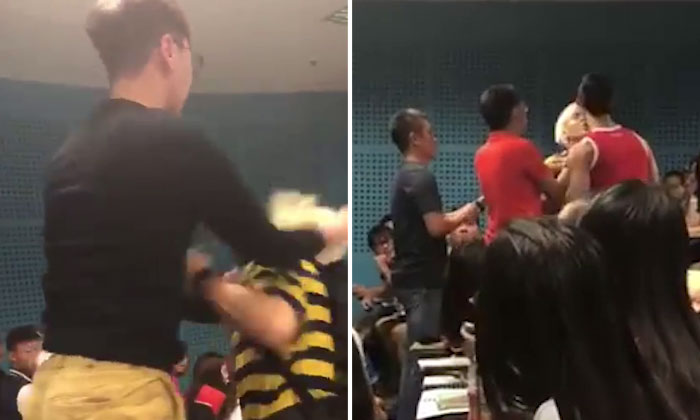 Temasek Polytechnic is investigating a fight that broke out in a lecture theatre on Wednesday (Apr 18) involving three first-year students.

Several clips of the incident were posted online following the incident and an 18-minute video compilation was shared on Reddit.

Stomp has censored expletives used in the video.

In the video, a student wearing a yellow and black striped shirt is seen going on a tirade in the theatre.

He is confronted by another student wearing a black shirt who strangles him.

As a lecturer attempts to stop the fight, the student in the yellow and black striped shirt continues to shout and hurl vulgarities at other students.

He then picks a fight with another student wearing a red singlet who has to be held back from attacking him.

A Reddit user said that the student wearing the yellow and black striped shirt (referred to as Bumblebee) had been late and had disrupted lectures on Monday and Tuesday as well.

The user who said that he or she is a Temasek Poly student wrote:

"Today, he stormed his way into the lecture theatre and someone told him off.

"This didn't rub very well with Bumblebee who immediately became 'aggressive' with Mr Red Shirt because he poked fun at his ITE background.

"The 'fight' later subsided between them but Bumblebee still triggered he started picking fights with students (and even lecturers lol)."

The user added that eventually, the course manager and security were called in.

A Temasek Poly spokesman told The Straits Times on Thursday (Apr 19) that the scuffle broke out after one of the students created a disturbance during a lecture at about 11am on Wednesday.

The spokesman said that the students eventually calmed down after staff who were present intervened.

"Temasek Polytechnic (TP) views this matter seriously and is investigating the incident. All three students have been instructed to make themselves available to assist with the investigation," the spokesman added.

The polytechnic said that it would also take appropriate disciplinary action against the students, where necessary, in addition to counselling them.

"TP does not condone such behaviour of our students and will be speaking to all who were present in the lecture theatre," the spokesman said.