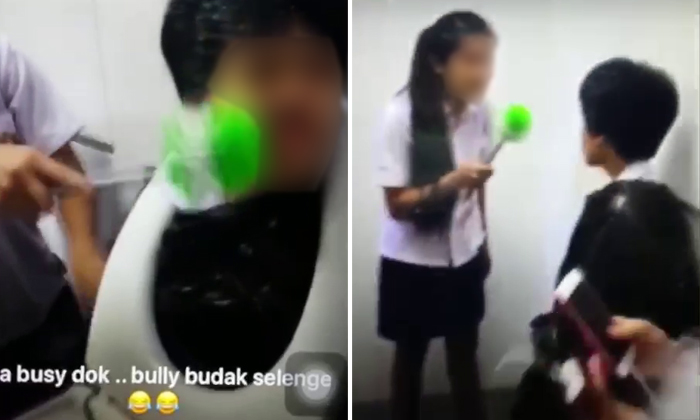 A group of girls from Assumption Pathway School were caught on camera taunting and bullying another student who is believed to be a special needs child.

Several Stompers alerted Stomp to the video, which appeared to have been originally uploaded as an Instagram Story and has since gone viral online.

According to multiple Facebook posts, the girl who was bullied is a special needs student.

A caption across the video said: "We are busy.. bully a blur kid (sic)."

In the 28-second clip, three girls are seen clad in their school uniform and standing around a short-haired female who had her back to a wall.

One of the girls was holding a toilet brush and using it on the victim, directing it towards her crotch and face as she squirmed:

Another girl then hung a toilet bowl seat on the victim's neck, before pushing the toilet seat cover towards the latter's face multiple times.

Laughter can be heard in the background.

When the victim removed the toilet seat from herself and tried to retaliate, the girl with the toilet brush appeared to chide her.

She also pointed the toilet brush at the victim and hit it against the wall:

The girl who was holding the toilet brush was subsequently identified by netizens.

A screenshot that Stomp received shows her requesting for the Instagram Story post to be taken down.

She added: "I was slowly trying to settle this, then you trend me? Hahahaha. I was okay with her just that too rough and this girl purposely post about me". 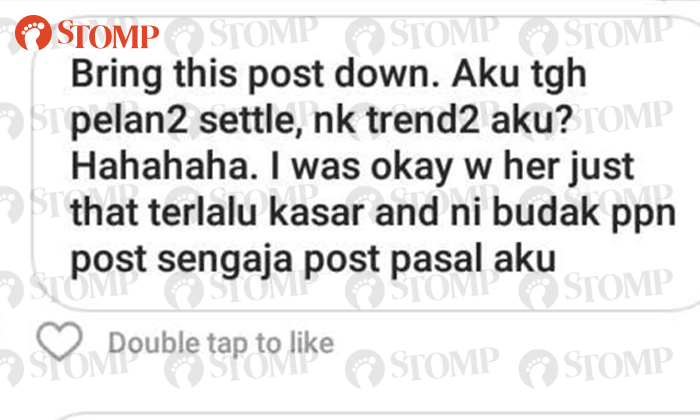 In response to a Stomp query, the principal of Assumption Pathway School, Mr Eric Leong said: "The actions in the video are unacceptable.

"We take a strong stand against bullying, and teach our students to care for others.

"We have since identified the offenders and taken immediate disciplinary action.

"We are also working with their parents to ensure that the offenders are made aware of the serious consequences of their behaviour, and that they will not repeat such behaviour.

"We are also providing counselling and continued support to the victim."

A police report has been made by a netizen who said she saw the video on Twitter.

Watch the full video below.