Taxi catches fire in Fernvale Dr carpark, 'suay' vehicles by its side damaged too 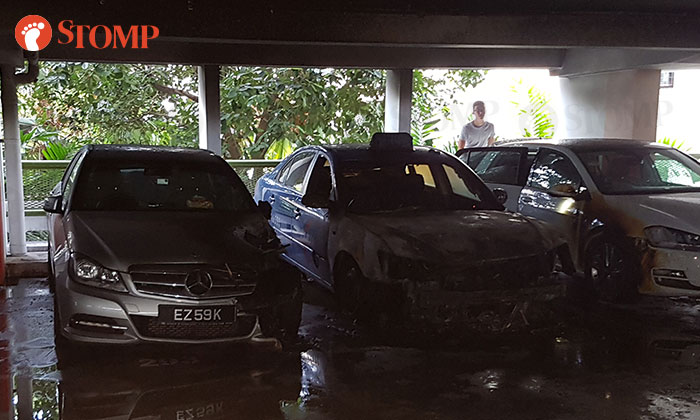 A ComfortDelgro taxi caught fire in a multi-story carpark at Block 117D, Fernvale Drive yesterday (Aug 25) at around 6am.

Stomper Hasan came across the charred car in the parking lot after the fire had been put out and snapped some photos, which he sent to Stomp.

In the pictures, the taxi was visibly damaged, with its bonnet burnt and the engines exposed.

The two vehicles on its left and right were damaged by the fire as well.

In response to Stomp's media queries, a Singapore Civil Defence Force (SCDF) spokesman said it was alerted to the fire at 6am on Aug 25.

"SCDF dispatched one fire engine, two Red Rhinos, one fire bike and one support vehicle to the scene.

"The fire involved the engine compartment of a taxi and was extinguished using a waterjet and hose reel jet.

"Due to the fire, the vehicles on the car's right and left also suffered damage.

"No one was injured."