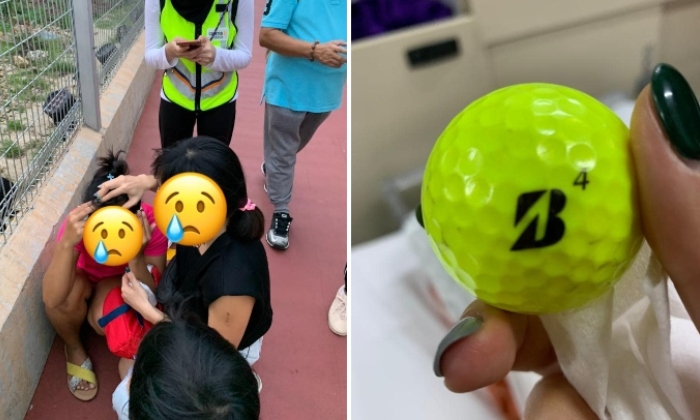 Tanah Merah Country Club has apologised after a stray golf ball hit a domestic helper at Jurassic Mile and is working with Changi Airport Group (CAG) to enhance the safety features of the track.

The incident happened on October 22 (Thursday) at 6pm and became publicly known after the employee of the domestic helper, Derek Yap, posted about the incident on Facebook.

The Facebook post, which Stompers Jeff and Anonymous alerted Stomp to, has garnered 1.8k comments and 14k shares to date.

Today 22 October 2020 at 6pm, I took the family and my helper to the newly opened Changi Jurassic Mile near to T4. All...

Derek shared that he was visiting the Jurassic Mile with his family and his domestic helper when he suddenly heard a 'loud thud'.

Derek then saw that his domestic hekper had "dropped on her knees" to the ground, "held her head and started crying".

He shared that his helper had been hit by a stray golf ball that came from Tanah Merah Country Club, which has a golf course and is located right beside Jurassic Mile.

He added that his helper had suffered a head injury with bruising but is doing "fine so far".

Derek suggested that visitors at Jurassic Mile should keep their "umbrellas open" and encouraged cyclists to "keep their helmets on" in the event that something like this happens again.

He ended off the post by thanking CAG for "doing all they can to help".

In response to a Stomp query, a spokesman for Tanah Merah Country Club said it is very sorry to hear that a visitor was hit by a stray golf ball along the Jurassic Mile track.

"We are already in contact with CAG, the developer of the Jurassic Mile track, and they are looking into enhancing the safety features of the track," added the spokesman.

"We are working closely with the CAG in this regard. One possibility being explored is putting up nettings in that area to prevent further accidents."

CAG also said in a statement that they regret this unfortunate incident and added that such an incident has never happened at Jurassic Mile before.

"Assistance was rendered immediately to the visitor last evening, and CAG is in contact with the family to check on her condition," said a spokesman for CAG.

"CAG is looking into additional ways to further minimise the risk of stray golf balls heading towards the Jurassic Mile, such as putting up nettings in that area.”