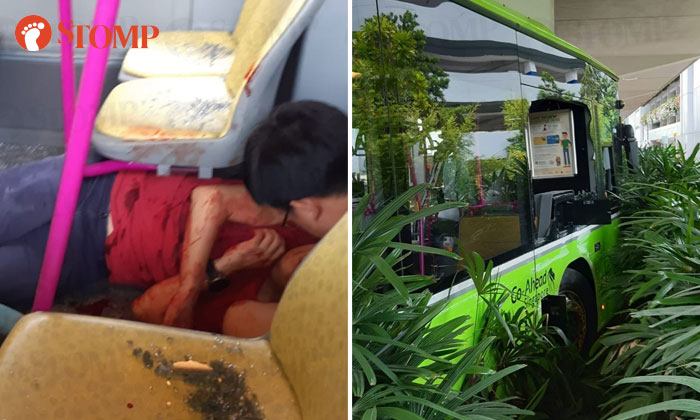 Seven people were taken to hospital after a bus accident near Changi Airport Terminal 2 on Sunday afternoon (Feb 2), with the 62-year-old bus driver having to be extricated from the bus by rescuers in a complex operation lasting 45 minutes.

The Singapore Civil Defence Force (SCDF) said in a Facebook post it was alerted to the accident at T2's bus interchange at 12.36pm.

It said that the bus, which is operated by Go-Ahead Singapore, was found crushed against a concrete pillar.

"The front of the bus was badly crushed inwards, pinning the driver to his seat," SCDF said.

SCDF said firefighters from Changi Fire Station and the Airport Emergency Service (AES) had to use hydraulic cutting tools to cut open the driver's window to let paramedics provide him with an intravenous drip.

"Due to the complexity of the rescue operation, rescuers from the SCDF's elite Disaster Assistance and Rescue Team (Dart) had to be deployed to the scene," it added.

"The Dart Rescue Vehicle was utilised to pull the bus slightly from the pillar but without aggravating the driver's injury so as to provide the rescuers a bit of operating space."

The Dart rescuers had to work carefully around the limited space around the driver.

They subsequently reached the driver by prying the dashboard which had pinned his legs using a slew of hydraulic rescue equipment, and freed the driver through the rear doors of the bus.

"The driver was safely extricated and conveyed to CGH by an SCDF ambulance in a conscious state," SCDF added.

At the same time, paramedics and medical crews from the Airport Emergency Service assessed and treated six passengers in the bus before taking them to Changi General Hospital.

The police said the injured passengers are aged between 24 and 72. They are investigating the cause of the accident.

Go-Ahead said eight commuters were on board the bus when the accident happened.

Four of the six passengers sent to hospital have been discharged, the company added. The remaining two passengers and the bus driver are in stable condition.

A spokesman added that it is cooperating with investigations and helping the families of those injured.