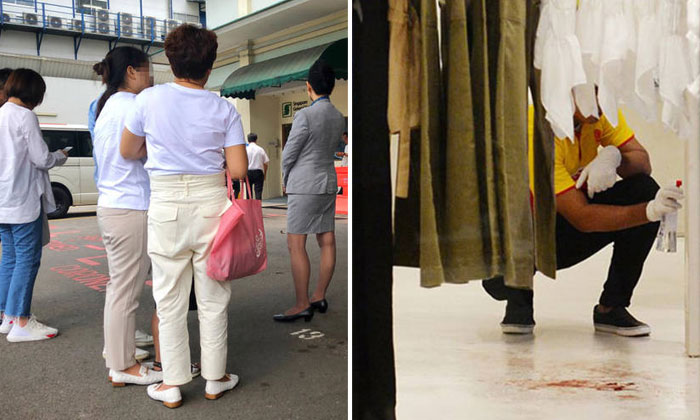 The family of the 18-month-old girl who died after a mirror fell on top of her at a fashion shop in Jewel Changi Airport have flown home to China, but have engaged a lawyer to handle the case here, The Straits Times understands.

The family, who were on holiday from China, returned home on Monday (Aug 26) afternoon, a day after the girl was cremated.

The tragedy last Friday took place at the two-storey Urban Revivo store about three hours before the girl and her family were originally due to fly back to China.

Chinese evening paper Lianhe Wanbao reported that they were scheduled to take a 3pm flight to Xiamen that day.

The toddler, identified as Lai Jiaxin, was reportedly with her family and a few other relatives when the incident occurred.

The Singapore Civil Defence Force responded to the incident at 12.33pm. Police said the child was unconscious when she was taken to Changi General Hospital, where she was subsequently pronounced dead.

Meanwhile, the store has removed all its free-standing mirrors from its premises.

Checks by ST on Monday showed that the Urban Revivo store was still cordoned off and that there were no more full-length mirrors in the shopfront.

Earlier pictures and videos of the store showed full-length oblong-shaped mirrors that were free-standing and supported by a frame behind.

This was the type of mirror believed to have fallen on the toddler who was cremated on Sunday at Mandai Crematorium.

According to Lianhe Wanbao, a few children had knocked down the mirror while playing in the Urban Revivo store.

The mirror reportedly fell on the toddler, who was then standing in front of it.

Police have classified the incident as an unnatural death and are currently investigating.

Lawyer Rajan Supramaniam, who is not representing the family, said investigations will reveal the facts that led to the fatal incident and will help determine if it is an accident, if any of the parties are at fault or if there is criminal negligence.

If any party decides to pursue a civil case, the courts will have to determine on liability and damages, he added.

Urban Revivo is a Chinese fashion clothing store founded in 2006, with 200 stores in China and across the world, including Europe, North America and Japan.

It has three outlets in Singapore - at Jewel Changi Airport, Plaza Singapura and Raffles City.