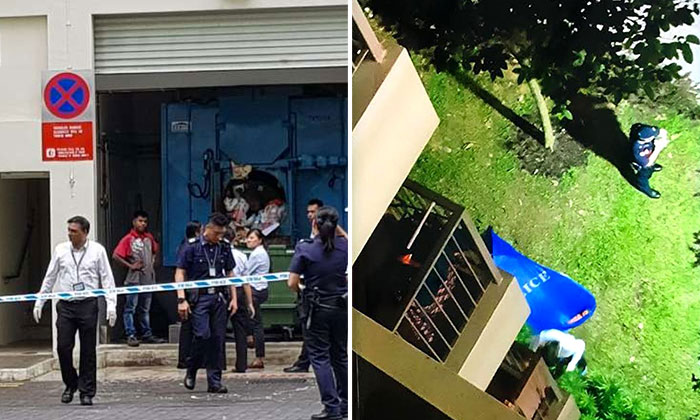 The police were alerted to a 49-year-old male deceased at the foot of the block, but upon breaking into the unit from which the victim had fallen from, found the 46-year-old female owner dead, with multiple stab wounds on her chest and abdomen.

The harrowing incident happened at Block 520A ,Tampines Central 8 on Monday (May 29) at around 10.15pm, reports Shin Min Daily News via Lianhe Zaobao.

Investigations revealed that the 46-year-old female deceased, Serinn, was a divorcee and the listed owner of the 3-room flat.

She was discovered dead in the master bedroom, drenched in her own blood.

The 49-year-old male deceased was married and it is believed that the two victims were having an affair.

Police officers received a report and rushed to the scene to find the male deceased sprawled across a patch of grass at the foot of the block.

Two hours into the preliminary investigation, officers uncovered the unit from which the man had fallen from -- only to find the female deceased lying on a bed in the master bedroom.

Officers also noted that she bore serious stab wounds on her chest and abdomen, and officers suspected the injuries to be the cause of death,

Many speculated that the male deceased had fallen from the unit after fatally stabbing the woman.

Neighbours interviewed say that they frequently hear people quarrelling in the victim’s unit but that it had been strangely quiet just before the incident.

A 34-year-old resident told reporters that that he had heard a loud noise coming from the foot of the block on the night of the incident, believed to be the male deceased hitting the ground.

Another 52-year-old resident revealed that she only saw the male deceased on the grass patch after the incident.

“We didn’t really hear anything that was out of place.

“It was quite strange.”

The police are investigating the ties between the two and what could have led to the tragedy.