Students hogging Starbucks seats: Woman asks "what do you want us to do about it?" 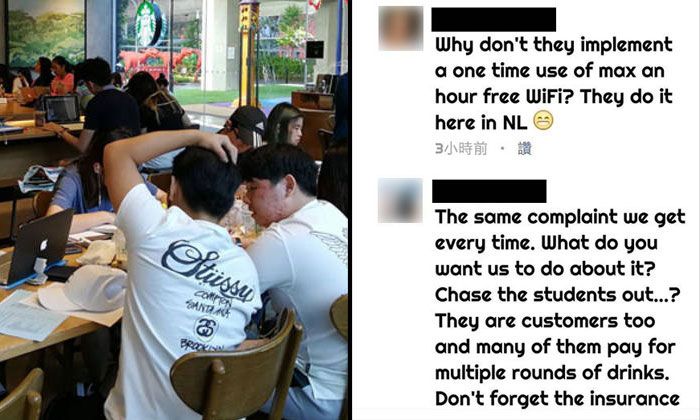 A frustrated patron's experience at a Starbucks in Choa Chu Kang that was almost fully occupied with students sparked a heated discussion about students "hogging" spaces at cafes for hours.

After a Stomper read the report on Stomp, he shared screenshots of comments made by a woman defending the students and saying that "Starbucks is a place for EVERYONE".

According to the Stomper, the comments were made on a post on Starbucks Singapore's Facebook page regarding the opening of a new outlet.

He added that the post has since been removed.

It is unclear whether the person is an employee or manager of Starbucks but her comments infer that she works at one of the cafes.

In her comments, the woman offered a different perspective on the hot-button issue.

She wrote that students are customers too since they buy multiple rounds of drinks.

She also said that they are not the only ones who "hog" tables and added that "insurance guys" and some families do the same thing as well.

Below are her comments in full:

"The same complaint we get every time.

"What do you want us to do about it?

"Chase the students out...?

"They are customers too and many of them pay for multiple rounds of drinks.

"Don't forget the insurance guys who sit around for hours with nothing but iced water, and families who treat the cafe like a reunion at a restaurant.

"Instead of pointing the blame at Starbucks or the students, why don't we learn to be more considerate?

"Ask the students if they can take their bags off the chairs and share tables to open up the space.

"Approach the baristas NICELY and they'll be more than willing to squeeze people to the back.

"In fact, I make multiple rounds up and down the store to move people during weekends and public holidays.

"We also clear unattended belongings so that seats are occupied by people and not bags.

"Starbucks is a place for EVERYONE.

"And that everyone includes students who pay for their drinks and food."

Related Stories
Customer enters CCK Starbucks and exits again: "Why do students have more rights than normal patrons?"
Girl complains about being asked to leave for studying at Starbucks... but gets burned by netizens
There's study area and library near Keat Hong CC -- but students choose to hog seats at Starbucks
More About:
starbucks
studying
controversy