Stompers play along with SMS from "Sheng Siong" that informs win: 'If I won, why need lucky draw?' 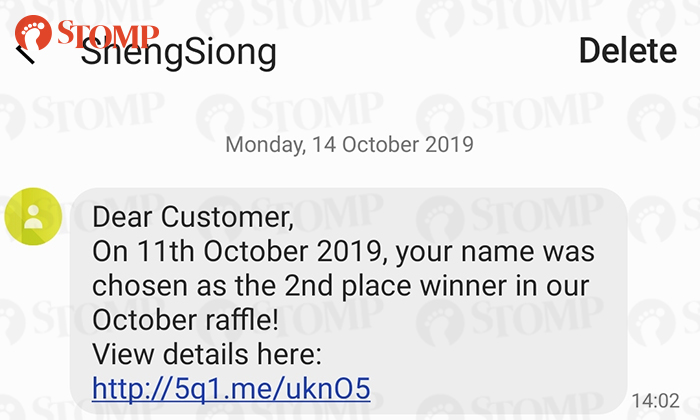 But instead of ignoring the SMS, two Stompers decided to play along with it. 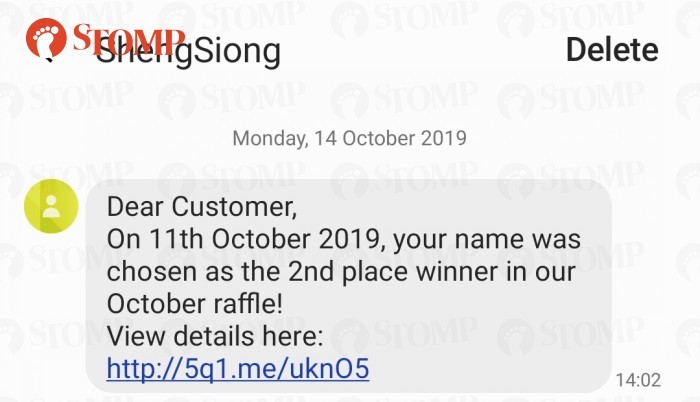 Mdm Leong told Stomp: "I tapped on the message and opened the link, finding it suspicious already.

"It doesn't make sense. If I had won the second prize, then why do I need to go through a lucky draw to determine whether I can win an iPhone 11?

"I played along with the website and true enough, they proceeded to ask for my information like credit card details, CVV number and more. That's when I stopped.

"This is not the first time I've received such messages purportedly from Sheng Siong.

"I have a friend who is very naive and will fall for such ploys.

"I'm 65 years old and my friend is very much younger than I am. She's very eager and will always forward such messages to me. I'll always tell her that it could be a scam."

This is not the first time people have received SMS notifications from "Sheng Siong".

Each time, the promised prize changes -- from a Huawei P30 to a Samsung Galaxy S10 and now, an iPhone 11.

Mdm Leong added: "I think it's important to get this message out to the public. This is so dangerous.

"With the credit card details, scammers can charge any amount they like to your card.

"Also, the website has a number stated where one can call in case help is needed is not a local number."

Stomper Vincent shared that his father had received the same message from "Sheng Siong".

He told Stomp: "My sister and I opened the link and she said that the website is like trying to get personal details.

"We didn't put in any information but wanted to highlight this since it's the newest message for October.

"I know of the previous similar ones but this is the first time my family received such a message from 'Sheng Siong'."