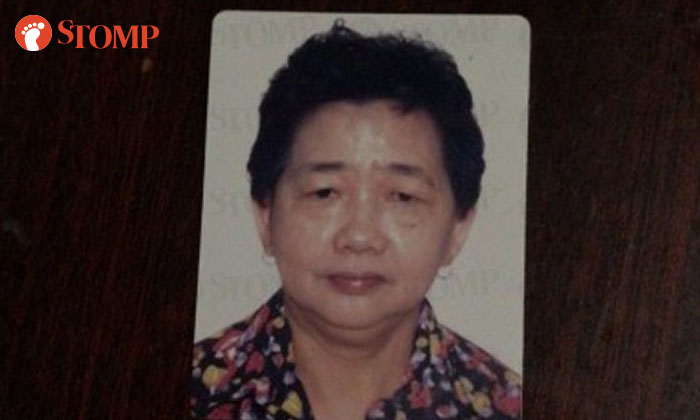 Stomper Samantha and her family are anxiously looking for her aunt who was last seen at Block 16 Marsiling Lane on Monday (Dec 3).

Samantha told Stomp that when her mother visited her 69-year-old aunt, Ms Phua Mui Hway, she was not at home.

Her mother lodged a police report the next day (Dec 4) when she still could not find Ms Phua.

Samantha told Stomp: "My mum frequently checks on my aunt and buys her food.

"On Monday, she was there for a routine visit but my aunt was nowhere to be found."

The Stomper added: "My aunt does not really converse normally. If you talk to her, she might not reply.

"She'll look to the ground and mumble to herself."

Samantha said her aunt would regularly take walks around the neighbourhood.

Samantha's family are still looking for Ms Phua around Marsiling.

This morning (Dec 6), they went to her house to see if she had returned home, but she still had not.

Ms Phua's neighbours also told Samantha they had not seen her in a while.

"My family and I are very worried about my aunt.

"She might be starving as she only has a few dollars with her.

"If anyone has seen her, please call the police or bring her to the nearest police station. We would greatly appreciate any information given to us."

In response to a Stomp query, the police said: "The police confirm that a report has been lodged.

If you know the whereabouts of Ms Phua, kindly contact Stomp at stomp@stomp.com.sg or WhatsApp 9384 3761.