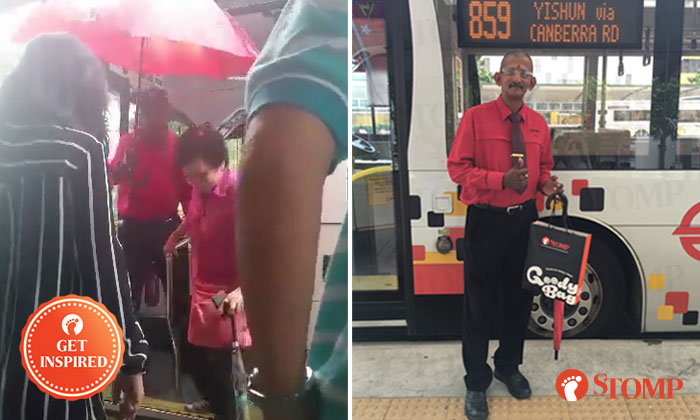 The SMRT bus captain who helped shelter passengers from the rain with an umbrella was presented with a Stomp Goody Bag yesterday (July 28) at Sembawang Bus Interchange.

In an earlier Stomp article, it was reported that Segar S/O A. Subramaniam engaged in the kind deed on July 14 at around 12pm at a bus stop outside Sembawang MRT Station.

In a video of what happened, which was posted on All Singapore Stuff, the thoughtful 54-year-old can be first seen sheltering an alighting elderly woman from Bus 859 that he was operating.

Thereafter, he did the same for around 15 passengers.

With the help of SMRT, Stomp tracked down the bus captain and paid him a visit.

There, he shared with us what happened.

Segar told us that the safety of his passengers was his top priority.

He has been sheltering commuters during rainy days since he first started driving an SMRT bus four months ago.

Everyone who boards or alights his bus, regardless of age, are beneficiaries of the good service Segar provides.

Despite going out of the way to ensure that his passengers have an enjoyable experience, Segar insists that what he has been doing is nothing much.

"I am just doing my part as a bus captain", he said humbly during our chat.

Segar was alerted to the video of what he did by a colleague and admitted that he was shocked by the response to his act of goodwill.

The bus captain explained: "I never expected this video to go viral so fast. I did my part as a human being. If I can help, why not go an extra mile."

One additional mile, however, was not enough for Segar.

Other than providing passengers with cover from the rain, he also takes pride in helping elderly commuters carry items on board his bus.

Kids, too, are at the receiving end of his outstanding service.

Segar keeps a box full of sweets near his steering wheel and hands them out to young ones he comes across.

In appreciation for all he has done, we presented Segar with a Stomp Goody Bag, which he graciously accepted.

Towards the end of the interview, he shared with us how his kind acts were reciprocated by a grateful commuter.

Said the bus captain: "She will take my bus, and whenever she gets on, she will give me bread. She will ask me to give it to my children.

"She said 'no, I am working at a bakery,' and she just offered the bread to me. That also made me very happy.

"When you care for people, people also care for you. That is what I have learnt."

Stomp presented Segar with a 'Goody Bag' for being an inspiration, as part of our efforts to recognise everyday heroes and highlight heartwarming deeds.