Remember uncle who gave free vegetables to CCK residents? Stomp thanks him with our Goody Bag 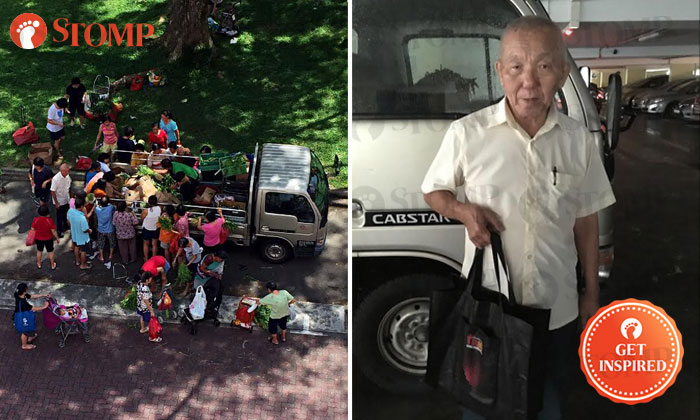 An elderly uncle was given a Stomp Goody Bag in appreciation for his kind act of handing out vegetables to Choa Chu Kang residents for free.

In a Stomp article that was published the next day, it was reported that the heartland hero drives his lorry to a carpark two to three times a week to hand the vegetables out to residents.

The food items up for grabs include kangkong, carrots, brinjal and other leafy vegetables.

"We need more generous and giving people like Veggie Uncle in the world! I hope that folks will find some way to give back to him as well," said the Stomper.

Following the report, the Stomp Team made a trip down to the Choa Chu Kang carpark on Jul 5 to thank the uncle with a Stomp Goody Bag, and to see what goes on during a typical 'veggie giveaway'.

Upon arrival, we saw clusters of residents waiting at the foot of several HDB blocks. While waiting for the arrival of 'Uncle Veggie', we spoke to some of them.

They told us that they have been receiving the free vegetables for many years. Some of the residents said that they were from low-income families, and that the uncle's kind act goes a long way in helping them reduce their expenses.

Around one hour later, the uncle arrived. As it was raining very heavily, he parked his vegetable-filled lorry in a multi-storey carpark instead of his usual spot at an open lot.

Subsequently, a group of around 25 residents crowded around the vehicle and started helping themselves to the vegetables. They took handfuls of stalks and leaves, and placed them into trolleys they had brought.

Although it was crowded, the residents made sure that they conducted themselves in an organised manner. Shouting and shoving, like what you'll typically associate with free-for-alls, were non-existent. At times, some even offered to help others who could not reach the items they wanted. After residents had taken enough, they vacated their spots and others nearby took their place.

As the vegetables were being cleared from the lorry, we went to speak to the uncle who was standing at a corner observing what was going on.

Through our conversation with the uncle, Mr Cheu, we learnt that he has been giving out vegetables to residents for almost 20 years. The 75-year-old currently sells vegetables at Pasir Panjang Wholesale Centre. He works almost every day from 1am to around 6am, then drives to Choa Chu Kang to give away the unsold food items. As and when he was vegetables to give away, the kind-hearted individual will head down to meet the residents.

He lives around the area where he parked his lorry, and knows many of the residents personally. When he arrives with the free vegetables, he will notify some of them via telephone. The message will then be passed on among friends and neighbours.

When asked about the media attention he has been getting, Mr Cheu responded humbly in Mandarin:

"I am only giving away vegetables. It is only a small thing."

Thereafter, we presented 'Uncle Veggie' with the Stomp Goody Bag that we had prepared. He thanked us and placed it inside his lorry, before distributing brinjals that had not been given out earlier. Being the generous person that he was, he offered the Stomp Team four juicy, bright purple brinjals, which we graciously accepted.

Around 30 minutes after he arrived, the crowd started clearing up. Some stayed behind to clear up bits of vegetables that were strewn on the ground of the indoor carpark.

One by one, the grateful residents then left for home, in anticipation of the wholesome meals that lay in front of them, all thanks to 'Uncle Veggie'.

See how Mr Cheu's giveaway was like in the video below.

Stomp presented Mr Cheu with a 'Goody Bag' for his good deed, as part of our efforts to recognise everyday heroes and highlight inspiring deeds.

Know someone who deserves a 'Goody Bag' or had a heartwarming encounter? Share your story with us at stomp@stomp.com.sg or WhatsApp +65 9384 3761.

Related Stories
Kind uncle brings free veggies and smiles to residents at CCK
While some are on Bigo to impress girls, this 26-year-old uses it to save animals
Man who saved sleeping guy receives Stomp 'Goody Bag': Not the first time he has stepped up in public
More About:
heartwarming
inspiring
choa chu kang
vegetables
elderly
food
Stomp Goody Bag
SGCares