Stepping up escalator safety: The Dos and Dont's of riding the escalator 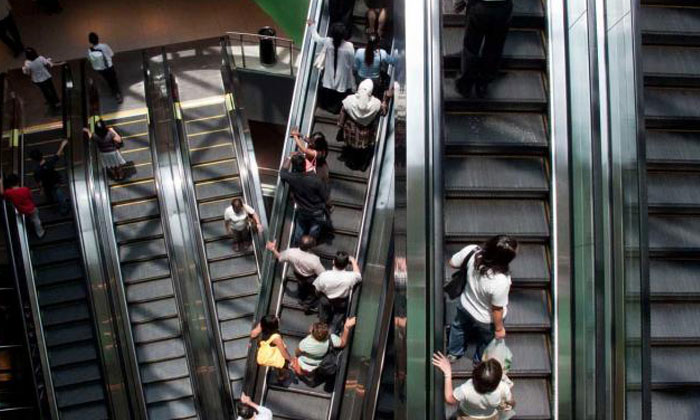 A step in an escalator at White Sands Shopping Mall in Pasir Ris buckled on Saturday (Jan 21), just after a couple with a baby in a stroller stepped off.

Fortunately, no one was injured.

Escalator incidents have been in the spotlight recently, with the Building and Construction Authority (BCA) telling The Straits Times in a report on Jan 2 that it had received reports of 63 cases since Nov 1, 2016.

Of these, 95 per cent of them were attributed to "user behaviour".

Here are some dos and don'ts while taking an escalator, according to a BCA advisory.

1. Hold on to the handrail.

2. Accompany young children on the escalator.

3. Push the emergency button to stop the escalator for emergencies.

4. Stand within the yellow lines marked out on the escalator steps.

5. Use the lift instead if you are pushing a trolley, pram or luggage, or have limited mobility.

1. Stop or loiter at the landing area, as this obstructs other passengers.

2. Be distracted by your mobile device, and do not drag or slide your feet off at the end of the escalator.

3. Play or run on the escalator, or lean over the handrail.

4. Stand near the sides of the escalator, as soft footwear may get stuck in the gaps.

5. Stand at the edge of escalator steps, as this can cause a loss of balance.

A stroller was wedged between escalator steps at Raffles Place MRT station as it approached the upper landing.

The downward pressure exerted on its wheels caused the steps to dislodge and triggered a mechanism that stopped the escalator, BCA said.

The child in the stroller was unhurt.

A metal piece broke off from an escalator step at AMK Hub shopping mall, piercing a young boy's Crocs shoe.

The five-year-old boy was reportedly not injured.

A man in his 20s was taken to Singapore General Hospital after his foot was caught in an escalator at Bugis Junction.

He was stuck for about half an hour, with the Singapore Civil Defence Force releasing his foot with hydraulic rescue tools.

A 64-year-old retiree was warded at an intensive care unit, after he fell down an escalator at Bishan MRT station.

Mr Lim Chwee Leong underwent surgery immediately after the accident to remove a blood clot in his brain.

He woke up from his coma on Jan 11 this year.

A man in his 70s fell from an escalator at a shopping mall in Sembawang.

SCDF responded to the accident at Sun Plaza, dispatching an ambulance to the scene.

The man was taken conscious to Khoo Teck Puat Hospital.