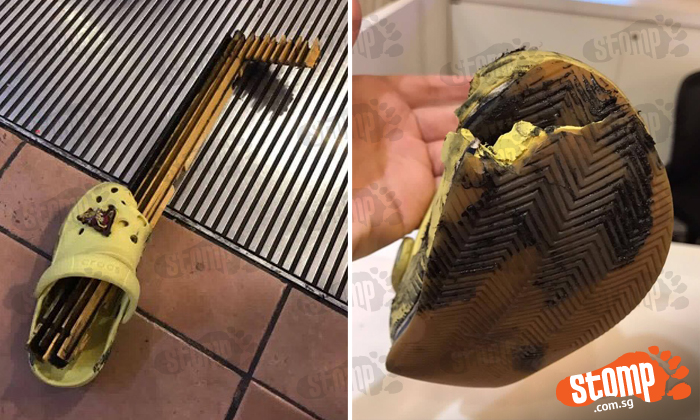 Stomper M's five-year-old grandson had a harrowing experience while on an escalator at AMK Hub last Thursday (Dec 15), slightly after 1pm.

A metal piece from the escalator that was going down to Basement 2 and towards NTUC FairPrice Xtra pierced through the toddler's sandals.

M is upset at how staff at AMK Hub's Customer Service handled the situation. She also raised concerns about how she saw the escalator still in operation, hours after the unfortunate incident.

"Last Thursday afternoon, we were going down the escalator to B2, going to NTUC.

"My grandson and his mummy were standing behind me. Halfway through, we heard something like the sound of chains dropping.

"I turned back my head, I saw my daughter carry his son and the next moment, we saw that his left shoe had something poking into his shoe.

"When we reached the end, we saw that one part of the escalator step had broken into a mysterious way. Everyone who saw that were totally stunned"

According to M, passers-by who saw what happened were in shock as well and some took photos. She continued:

"Thank God his left foot was okay. We were so shocked till we didn't know what to do and many people came crowding around.

"After minutes, the head of security came and his care was good.

"Some people in charge of AMK Hub came. I have no idea who they are, but we wasted more than an hour to two hours.

"The Senior Executive of Customer Service then told me the would investigate. That was all their response.

"I said that my grandson has no shoes, so they got someone to buy a pair of shoes from NTUC. It resembled the Crocs type!

"I was so shocked at why are they buying this same type of shoes and the lady who had gone to buy them told me that she actually wanted to buy flip flops instead, which is even more shocking!

"Is this all they can care for a kid who was shocked after the escalator poked his left foot for no reason?

"After this shock, we forgot what we actually wanted to buy so we just roamed around for a couple of hours and I saw that they still let the escalator continue running, without anyone coming to investigate."

M added that there were no signs to warn people of what had happened or indicate that the escalator was broken.

She and her daughter (the boy's mother) also received an email from a Senior Executive at AMK Hub's Customer Service, which M feels sounded unsympathetic.

"Please take a look at the pictures and the email response from them. There is no logic in the way the escalator broke and they can tell us the escalator is SAFE! Really unbelievable!

"The email did not even ask about my grandson and if he was okay."

M also went down to AMK Hub's management office earlier this morning (Dec 22) and is still awaiting for a satisfactory response from their end.

She added that her grandson now has a phobia of taking escalators, but it is part of his daily route to his childcare centre and that the lifts at the mall take too long.