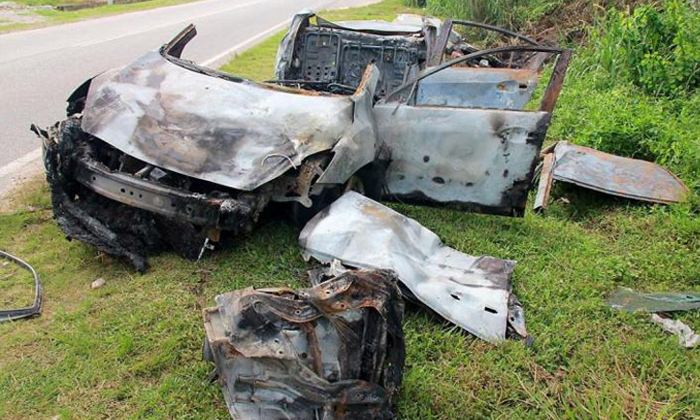 A Singaporean man and a Malaysian woman died in a fiery car crash in Muar, Johor, yesterday.

Mr Tay Hock Lai, 54, is believed to have lost control of the car, crashing it into a telecom box around 4am.

He and one of his two passengers, Ms Chan Choon Siang, 35, died, while Ms Lynette Lim, a 44-year-old Singaporean, was admitted to the Sultanah Fatimah hospital in Muar with a fractured right arm.

Muar police chief Azman Ayob told The Straits Times initial investigations showed the crash had "caused 100 per cent burns" but did not elaborate.

The car reportedly flipped on its side and caught fire after crashing near a temple at Jalan Bakri.

The Star online news site said firemen took about two hours to put out the fire.

A 58-year-old witness, who was watching over the nearby temple, said he heard a loud boom and saw a car burning while a young woman frantically asked for help from passing cars, reported Chinese Daily Nanyang Siang Pau.